Under the Lawman's Protection by Laura Scott (SWAT: Top Cops #3) 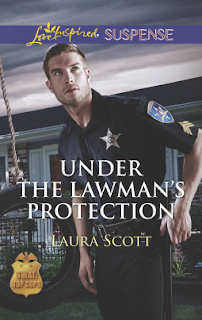 A PROMISE TO PROTECT

As a skilled SWAT team negotiator, Isaac Morrison has defused many a crisis situation. But safeguarding Leah Nichols and her young son may be his most challenging mission yet. Leah's brother —his best friend Shane —has gone missing while working undercover. Now it's up to Isaac to protect mother and child from Shane's enemies. He doesn't know whom they can trust, but he's determined to catch the gunmen threatening their lives. Isaac knows he needs his best protection skills against their formidable adversary. Because he can't risk the consequences to the little family who has stealthily claimed his heart.


My review: Under the Lawman's Protection by Laura Scott (SWAT: Top Cops #3)

This is a good suspense action. You never knew for sure who the bad guys were till they revealed it. Did not put the book down till I finished reading. Fast read. When things looked liked they were calm than more drama and action. I liked that they prayed for help, protection, and food. I liked the characters.

Isaac Morrison got a message on his phone to protect a friends sister and kid because his cover was blown. He could not trust anyone.
Isaac when he received the message was already an hour old. Isaac was a SWAT officer. His friend Hawk lived in a close city and different police department.

Isaac had only met Leah Nichols a few times. He hoped she still lived in same place. When he got their he found someone sneaking around. He got Leah and Ben to safe away but not for long.

Leah is a widow raising her 5 year old son Ben. Her only other relative is her brother. Their father died in line of duty so she was always afraid for her brother. No way was she going to fall for a cop.

I have read two of the three books of this series and have liked them both. I would love to read the book I have missed reading.

I would read more books by Laura Scott in the future.

I was given this ebook to read by Net Galley and Harlequin. In return I agreed to give honest review of Under the Lawman's Protection.
Posted by rhonda1111 at 5:32 PM