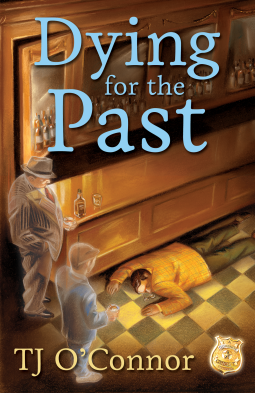 Dying is not for the faint of heart.

Neither is the murder of a mysterious philanthropist with ties to the Russian mob and 1939 gangsters.

Former detective Oliver “Tuck” Tucker—ghost-detective extraordinaire—is on the case with the help of his wife, Professor Angela Tucker and his former police-detective partners. Together, they must find the killer and be the first to read "the book"—deceased gangster Vincent Calabrese’s journal that names names and reveals the dirty secrets of several modern-day spies.

As Tuck learns the book’s secrets, he begins to unravel his own family’s wayward past leading to the question—is being a ghost hereditary?

Even while chasing a killer, the biggest challenge Tuck must conquer is how to be back amongst the living but not one of them.
Series: A Gumshoe Ghost Mystery (Book 2)


My review: Dying for the Past by TJ O'Connor (A Gumshoe Ghost Mystery #2)

Dying for the Past is the second book in the A Gumshoe Ghost Mystery series. It is full of drama, mystery, fun characters including lots of ghosts, twists you might see and twists that blind sided me. Kept my attention, kept me guessing to the end.

Oliver Tucker better known as Tuck is dead but not gone. He is a ghost. His wife, dog can see him and hear him. His ex-partner Bear can hear him but does not admit he can. Tuck used to be a detective.

Professor Angela Tucker has a fundraiser at old mansion where one of guests has been murdered on the dance floor. Also her funds has been taken and a another detective has been shot.

Bear is on the case, he gets a new partner to work with but his old partner is still helping him.

Tuck runs into more ghosts of mobsters from the 30's still live in the mansion. The head mobster ghost wants Tuck to find his book. The other is a hot ghost who flirts with him.
The FBI wants to take over the case from the local police. They want to find the book too. The Russian mob wants the book.
Their is someone stalking Angela and even tries to break into her house.

You don't know who the bad and good guys are till the end and you learn not everything is all white or black.

Tuck sometimes when he touches things jumps back in the past and witness things from long ago or just from a few weeks.

Some funny moments when Tuck decides to scare some people.
I would read more of the Gumshoe Ghost in the future.

I was given this ebook to read by Net Galley and Midnight Ink. In return I agreed to give honest review of Dying for the Past.
Posted by rhonda1111 at 8:33 PM