Toured to Death by Hy Conrad 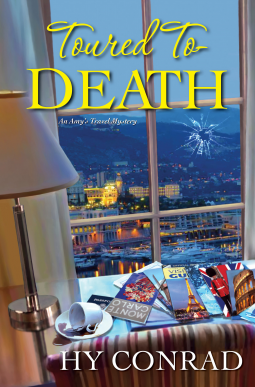 “Fast-paced, entertaining, and a mystery-lover’s treat.” —John Clement, co-author of the Dixie Hemingway series
Book a ticket with this all-new mystery series featuring Amy and Fanny Abel, a spunky mother-and-daughter duo of travel agents who find their mystery tour becoming all too real…

While Fanny takes care of the business end of Amy’s Travel in New York City, Amy is traipsing around Monte Carlo, managing their first mystery-themed excursion, a road rally in which guests compete to solve a fictional murder along the way. Amy still has reservations about partnering up with her mother. But both women, having lost the men in their lives, need a fresh beginning.

The trip starts off without a hitch. Clues quickly mount, the competition is lively, and just when the suspense is peaking, the writer they hired to script their made-up mystery is found murdered in his New York apartment. Suddenly, on top of running a new venture together, mother and daughter must solve a real-life case of foul play, while trying not to drive each other bonkers. But Amy and Fanny are ready, willing, and Abel to track down a clever killer with some serious emotional baggage, one who will go to any lengths to keep dark secrets from seeing the light of day…

My review: Toured to Death by Hy Conrad

The setting is something that sounds cool to me a Mystery tour set in trip to Europe.  The owners are mother and daughter. Fanny and Amy.  Amy is leading the tour. Amy is shy and does not like limelight.  Fanny is more outgoing and daring.

The murder mystery they find out is based on  a real case.  The writer after he is paid is murdered back in New York.  There is someone following the tour that works for the writer. Amy has no idea who that is.  Also no one on the tour knows who the murder is on the tour.  Amy gets the clues only a day ahead and instructions on where to place the  clues.

Tour is going good until it starts going wrong. One of the ladies on the tour is murdered.  The others of the group don't believe that the person the Italy police arrested is the murder.  They think the three different murder cases are related. From San Francisco 4 years ago, New York and Italy.

I would read more of this series.  It tied up the cases in a good way. I guessed some of it but not all of it. The mystery was good. I liked the characters. It was also clean read.

I was given this ebook to read by Net Galley and Kensington Books.  In return I agreed to give a honest review of Toured to Death.
Posted by rhonda1111 at 10:15 PM