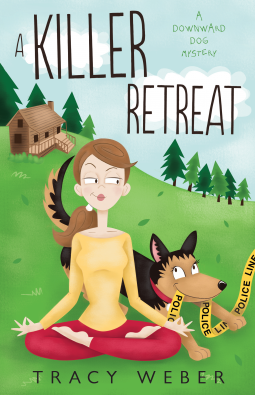 Yogi Kate must clear her name of murder in this charming yoga mystery
When Kate Davidson gets an offer to teach yoga classes to wedding guests at the Elysian Springs resort, she jumps at the opportunity, even though it means being forced to endure the wedding ceremony of the center’s two caretakers.
Avoiding the M-word turns out to be the least of Kate’s problems when a wedding guest is found floating face-down in the resort’s hot tub, shortly after a loud, public (and somewhat embarrassing) fight with Kate. The police pick Kate as their number-one suspect, so she’s forced to team up with boyfriend Michael, best friend Rene, and German shepherd sidekick Bella to find the real killer. But they’ll have to solve the murder before the police arrest Kate, or her next gig may last a lifetime–behind bars. 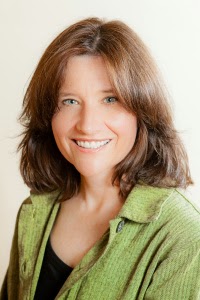 Tracy Weber is a certified yoga teacher and the founder of Whole Life Yoga, an award-winning yoga studio in Seattle, where she currently lives with her husband and German Shepherd. Weber is a member of the Pacific Northwest Writers Association, Dog Writers Association of America, and Sisters in Crime. She loves sharing her passion for yoga and animals in any form possible. Murder Strikes a Pose is Weber’s debut. For more information, visit her online at TracyWeberAuthor.com and WholeLifeYoga.com.
http://tracyweberauthor.com/
http://www.wholelifeyoga.com/blog/
https://www.facebook.com/tracywe
http://www.goodreads.com/author/show/7148442.Tracy_Weber
https://twitter.com/TracyWeberTypes


My review: A Killer Retreat by Tracy Weber

This is the second book in the series. Lots of mystery, lots of suspects, lot of Yoga, interesting characters and cute animals.

Kate Davidson is a Yoga teacher.  She has been hired to come to a retreat that is having a grand opening. Her boyfriend Michael and her dog came with her.  The first part of the book I did not think much of Kate.  She is rude and mean. Kate has a temper that I find hard to believe in someone who owns a Yoga studio and teaches it.

The setting for this book is Elysian Springs resort that is on a island a few hours away from
Seattle Washington.  I would like to go their except for the nude hot tubs. The whole resort is a vegan.

Monica is murdered and Kate had threatened her twice.  Monica has offended lots of people at the resort.  The owners are getting married.  Monica is the step-mother of the bride.

The yoga classes sound peaceful.  I have never been to one but it does tempt me to try it.

I was given this ebook to read so I could give honest review of A Killer Retreat and be part of it's blog tour.

The more I read about this book the more I want to read it, and I have also found a new blog!

Sounds like a fun book & I look forward to reading it.

I so want to read this book!!
thank you for the awesome giveaway!!