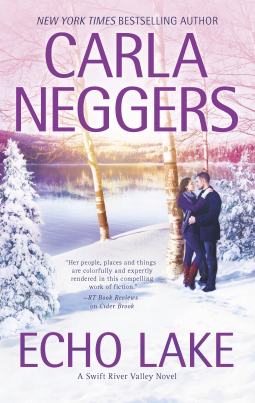 In snowy Swift River Valley, unexpected romance is just around the corner…

Heather Sloan has landed her dream job—the renovation of Vic Scarlatti's stately 1912 country home overlooking the icy waters of Echo Lake in Knights Bridge, Massachusetts. It's the perfect project for the family business, but for once, Heather is in charge.

Diplomatic Security Service agent Brody Hancock left Knights Bridge at eighteen, a few steps ahead of arrest and the wrath of Heather's older brothers. Though Brody had never planned to return, Vic, a retired diplomat and friend, needs his help.

Staying at Vic's guest house makes it impossible to avoid running into a Sloan at every turn—especially Heather. Seeing her again has affected Brody more than he wants to admit. But Heather is wary of Brody's sudden interest in her, and she suspects there's more to his homecoming than he's letting on….

Set against the scenic backdrop of a New England winter, Echo Lake is a captivating tale of family, friends and the possibility of new love.
Series: Swift River Valley Novels

It was good to back to Swift River Valley. The characters are interesting, and I want to see more of them. Cute puppy too. The mystery was okay. Part of it I guessed early. The setting was small town in winter. Good drama and romance.

Heather Sloan is in charge of renovation of 1912 stately country home. She is the youngest child with six older brothers.

Brody Hancock he works as a Diplomatic Security Service agent. He has come back to his home town of Knights Bridge to look into things for Vic Scarlatti problems. He is on leave after something about a mission went bad.

Vic Scarlatti just retired from working the past 40 years in government. He was a Ambassador. He has some unexpected things happening to him.

Lots of wine tasting, about building wine cellar. Which I don't drink and don't plan to so that part was not too interesting for me. I have no way of judging that part of the story.

Has some snappy dialog. Great descriptions of scenery.

I enjoy Swift River Valley and would come back to visit there again.

I was given this ebook from Net Galley and Harlequin. In return I agreed to give honest review of Echo Lake.
Posted by rhonda1111 at 10:42 AM