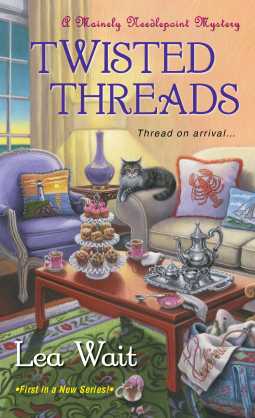 After leaving a decade ago, Angie Curtis has been called back to Harbor Haven by her grandmother, Estelle, who raised her following her troubled mother’s disappearance when she was a child. Her mother has been found, and now the question of her whereabouts has sadly become the mystery of her murder.
The bright spot in Angie’s homecoming is reuniting with Estelle, who has started her own needlepointing business with a group called Mainely Needlepointers. But when a shady business associate of the stitchers dies suddenly under suspicious circumstances, Estelle and Angie become suspects. As Angie starts to weave together clues, she discovers that this new murder may have ties to her own mother’s cold case.

Lea Wait lives on the coast of Maine. A fourth generation antique dealer, and author of the Agatha-nominated Shadows Antique Print mystery series, she loves all things antiques and Maine, and she’s learning to do needlepoint. She also writes historical novels for young people set in nineteenth-century Maine. Lea adopted her four daughters when she was single; she’s now the grandmother of eight, and married to artist Bob Thomas.
http://www.leawait.com/
Purchase Links
Amazon

This is a new exciting cozy series.  The mystery was good with some twists.  Clean, good read ,with characters I would like to see more of.  I can see how Angie could come across a lot of bodies in the future.

Angie Curtis lives in Arizona, working for P.I.  She gets a message from her grandmother to come home her mother was finally found.  Her grandmother Charlotte raised her.  Angie's mother disappeared when she was young child. She had left home when she was eighteen.

Angie's Gram had started a business with some friends.  Mainely Needlepoint.  They have not been paid for the past few months. They need to find the Jacques Latimore who was their agent. He owes them thousands of dollars.  Angie volunteers to help find Latimore.  She also plans to look into who killed her mother Jenny.

The pace was pretty good.  Story was easy to keep the charactes straight.

The setting is Haven Harbor,  Maine.  Where they get lots of tourists in the summer.

I was given this ebook to read by Net Galley and Kensington Publisher and in return agreed to give Twisted Threads a honest review and be part of it's blog tour.

The book cover of Twisted Threads is beautiful. The book sounds great, and I can't wait to read it.