Blog tour: A Boy Back From Heaven by Celeste Goodwin, Matthew Goodwin 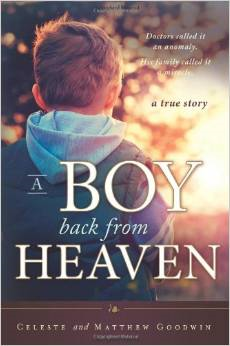 About the book:
Standing above his hospital bed, Celeste and Billy Goodwin watched in horror as their young son Matthew’s eyes rolled back in his head and he became unresponsive for several harrowing minutes. Doctors called the episode a medical anomaly, but what really happened can only be described as a miracle. Discover the truth about heaven through a child’s eyes as you read Matthew’s account of his walk with angels and his shocking revelation months later about the angels’ identities.

About the author:
Celeste Goodwin, pediatric hypertension advocate, is a Christian speaker, patient advocacy presenter, national award-winning mom, and founder of the National Pediatric Blood Pressure Awareness Foundation. Her passion to help others is evident by the dynamic presentations in which she uses humor and her love of God to encourage change. Through her writing and speaking, Celeste encourages others to never lose faith and to always rely on the power of prayer. She ignites thought provoking transformations in the hearts and minds of those she communicates with. Her effectiveness is evident by the honors she has received, such as being selected by Disney owned Babble.com, as one of 2011’s Top 100 Moms Changing the World in the education division. Celeste was honored as Baton Rouge City Social Magazine’s January 2012 Extraordinary Woman. Celeste has appeared on local and regional news, radio, and television programs. She has also been featured in varying print media.


My review: A Boy Back From Heaven by Celeste Goodwin, Matthew Goodwin

I knew this would be a emotional read.  I kept putting it off till the last minute.  I was right, it is touching, emotional and full of love.  I used many tissues reading this book.  It is a fast read.
The story was told simply in away that was easy to connect with the Goodwin family.  I wanted the best for Mathew and his family.

I see why people were expecting more about Mathew's experience.  It was short and sweet and important that we realize that life goes on and we are loved.  It felt real to me what Mathew experience was. They did not embellish more to the story.

I appreciate them telling their story.  That they are trying to save more children's lives by educating more about children and blood pressure how important it is. I don't remember if I got my children's taken when they were small.

How we can help those who are going through tough times by supporting places like Ronald McDonald house, hospitals, even making sure kids stuck in hospitals have Christmas.

I am glad that I was given A Boy Back From Heaven to read by Cedar Fort Publishing so that I could give a honest review of it and be part of it's blog tour.