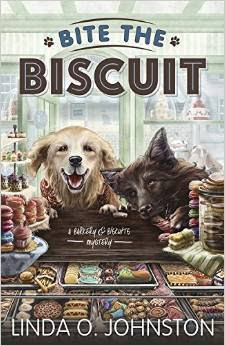 Carrie Kennersly, a veterinary technician, has become known for offering healthy and popular dog treats at the clinic where she works. When the local bakery’s owner moves away, Carrie jumps at the chance to convert it into the Barkery, a shop to make and sell her canine delights.
But Myra Ethman, co-owner of another pet product store, hates the new competition. At the Barkery’s opening party, she badmouths Carrie’s homemade dog biscuits, insisting she’ll find a way to shut the place down. So when Myra is found dead with a Barkery biscuit beside her, Carrie must prove she didn’t do it before she’s collared for murder. 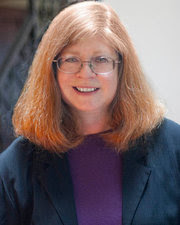 Linda O. Johnston’s first published fiction appeared in Ellery Queen’s Mystery Magazine and won the Robert L. Fish Memorial Award for Best First Mystery Short Story of the year.   Since then, Linda, a former lawyer who is now a full-time writer, has published more short stories, novellas, and 38 romance and mystery novels, including the Pet Rescue Mystery Series, a spinoff from her Kendra Ballantyne, Pet-Sitter mysteries for Berkley Prime Crime, and Harlequin Romantic Suspense as well as the Alpha Force paranormal romance miniseries for Harlequin Nocturne.  She additionally writes the Superstition Mysteries for Midnight Ink.
Her latest cozy mystery series, the Barkery and Biscuits Mysteries also from Midnight Ink, kicks off in May with BITE THE BISCUIT.

B&N
My review: Bite the Biscuit by Linda O. Johnston
4 STARS
This is a mystery that keeps you guessing till the revealed. I liked the main character Carrie.  Lots of drama. Lots of animals. This is a clean read.
Carrie Kennersly is a veterinary technician who is just opening her new business or two actually. She has bought a bakery from her friend and split it into two different business.  She makes dogs treat in one half called the barkery.
Her grand opening of her two business.  Lots of people has come out for it.  Myra Ethman owns a pet store and her family owns the resort.  Myra is bad mouthing Carries business during the grand opening.  The next day she is found dead.
Carrie is the main suspect in Myra's death.
I did not think the fight was strong enough for her to be the main suspect. I also think the motive of the killer is one people wont be able to figure it out.
It also has some recipes included for dog treats.
I want to see where the next book in the series goes. I will look forward to reading  more from Linda O. Johnson in the future.
I was given Bite the Biscuit to read by Net Galley and Midnight Ink    in return I agreed to give a honest review and be part of Bite the Biscuit blog tour.

Thank you for the review of Bite the Biscuit. It sounds like a great cozy mystery. I am looking forward to reading it.

Great review of Bite the Biscuit! It answered a couple questions, and made me want to read it even more! Thanks for being a stop on the tour!!

Cozy mysteries are fun to read . I especially like ones that have animals in it because I am such an animal lover. I know I would love to read this. I have been looking forward to it.