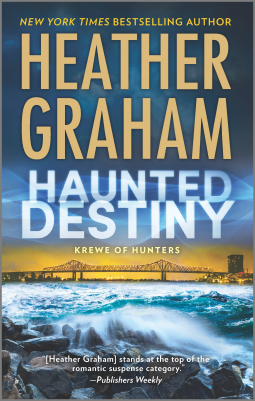 www.TheOriginalHeatherGraham.com
Between the evil and the deep blue sea…
A historic cruise ship, a haunted ship, the Celtic American Line's Destiny, sets sail from the Port of New Orleans—with a killer on board. He's known as the Archangel Killer because of the way he displays his victims in churches. And how he places a different saint's medallion on each body. No one knows exactly who he is or why he's doing this.
Jackson Crow—head of the FBI's Krewe of Hunters, a special unit of paranormal investigators—is assigned to the case, along with local agent Jude McCoy. Then Alexi Cromwell, who works in the ship's piano bar, is drawn into the situation when a victim's ghost appears to her—and to Jude. She and Jude share an attraction, and not just because of their mutual talent.
There are many suspects, but one by one they're ruled out… Or are they? In the end, Jude and Alexi have to rely on each other to catch the killer and escape his evil plans for Alexi.

My review: Haunted Destiny by Heather Graham (Krewe of Hunters #18)

Wow it kept me guessing till the end on who the killer was.  The ending was so sweet it brought me to tears.  Was not expecting that. This might be book #18 but it was still fresh and a nail biter.  There was only one Krewe and it was Jackson Crow himself.

Jude McCoy was a local FBI Agent in New Orleans and was partnered with Jackson for a serial murder.  They chased the suspect right onto a cruise ship. Not any just cruise ship but a old one that was used as a hospital ship in WW11.  It was known as a ghost ship to some.

Alexi Cromwell works in the piano bar.  She plays the piano.  Alexi also sees and talks to ghosts.

The ghosts are fun and arrange of characters that play a big part in the story.  I really enjoyed them.  Another big part of the story is the weather.

There is lots of drama, action, murder and romance.  There were a couple of love scenes.

I look forward to reading more books from Heather Graham in the future.

I was given this ebook to read from NetGalley and Harlequin.  In return I agreed to give a honest review of Haunted Destiny.
Posted by rhonda1111 at 9:43 AM