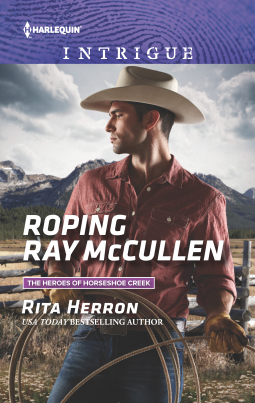 A MAN WITHOUT A FAMILY IS NO MAN AT ALL
As soon as he was old enough, Ray McCullen left Horseshoe Creek and never looked back. It took his father's funeral to return, though his anger hadn't quite subsided. That's where he met Scarlet Lovett, who seemed to know more about his family's secrets than he did. Secrets ready to explode. Suddenly, Ray was at the center of a dangerous inheritance battle, with Scarlet caught in the middle. She'd only known kindness from the McCullens, but had enough pluck to stand her ground. And if Ray was to truly belong back home, he sure had to live up to the family name.

Lot of mystery.  You know some of who the bad guys are but you don't know which crimes they committed and who the others you can't trust.

Characters from previous books and plenty of new characters too.  Ray is the third son.  He has come home because his father is dying.  He has not got along with his father because he knows some of his secrets.  His father dies before he can tell him everything.  Ray is a P.I.

Scarlet Lovett, shows up on the ranch two weeks after the funeral with a letter from Joe McCullen.  Telling that Joe thought of her as a daughter.  She was raised by Barbra and Joe's other son Bobby and they all were in the will.

Someone is trying to kill Scarlet. and stop her from receiving what Joe left her.  Scarlet is a social worker and helps at the group home that she lived in till Joe took her out of it and arranged for her to live with Barbra.

There is a lot of drama, some danger, romance.  There is one love scene. It leaves you wanting to come back to find out more secrets that Joe had.

I was given Roping Ray McCullen to read for free in exchange for a honest review from NetGalley and Harlequin.