Only You by Denise Grover Swank (Bachelor Brotherhood #1) 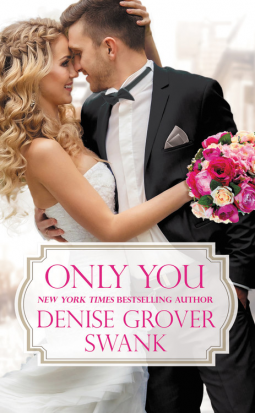 Never say never . . .Romance isn't an option for Holly Greenwood. With her wedding planner career on the line she needs to stay focused, and that means pleasing her demanding boss, not getting distracted by her mind-alteringly hot neighbor . . . Ex-Marine Kevin Vandemeer craves normalcy. Instead, he has a broken-down old house in need of a match and some gasoline, a meddling family, and the uncanny ability to attract the world's craziest women. At least that last one he can fix: he and his buddies have made a pact to swear off women, and this includes his sweetly sexy new neighbor. After one hot night that looks a whole lot like a disaster in the light of day, Kevin and Holly are about to learn that true love doesn't play by the rules . .

My review: Only You by Denise Grover Swank (Bachelor Brotherhood #1)

Only you is a romantic comedy. I liked getting to know the characters and look  forward to seeing more of them in the future.

There are a few love scenes in the story. I admit to skipping over them.

Ex-Marine Kevin Vandemeer comes home to a new house his sister bought for him that is a real fixer upper.  He has a job working for his friend in construction.  He has some crazy dates in the past and wants to stay single for awhile. It does not last long.

Holly Greenwood is single and a wedding planner.  Holly lives with her cousin.  Hates her boss.  She is sweet and a hard worker.  Holly gets asked to plan a big wedding in three weeks.  The bride is a terror and their is going to be a magazine shoot of the wedding.  It could make it possible to start her own business.

Holly and Kevin are now new neighbors.  They can't stop thinking about each other, but are not in a place to start a new romance in there lives.

I liked most of the humor. I could see some of it coming and others were a surprise.  Lots of weddings in the settings of this book

I was  given this ebook to read by NetGalley and Forever Grand Central publishing.  In return I agreed to give a honest review of Only You.