Web of Secrets by Susan Sleeman (Agents Under Fire #3) 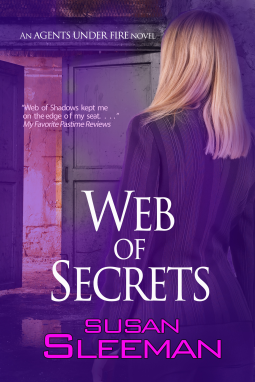 ***EXTREMELY ROUGH DRAFT, ADVANCED READING COPY***A nightmare come true...Years ago, a fifteen-year-old girl was abducted by a monster. Although she managed to escape, her tormenter was never caught. So the girl was given a new home, a new name...and the determination to save other foster kids from suffering similar horrors.FBI Agent Becca Lange is in the middle of a credit card fraud investigation when she’s faced with her worst nightmare: a serial killer, van Gogh—given the name because he removed his victims’ ears—has resurfaced. Back in the nineties, van Gogh tortured, then killed several young foster girls. Becca was almost one of them. Over the years, Becca’s been keeping her own investigation going. So when the police come to her for help, she’s more than ready to do what it takes to put van Gogh behind bars—even if it means working with Connor Warren, the easy-going cop whose attentions she’s been avoiding. Connor is too charming, too good-looking, too . . . tempting. He makes Becca want things she can never have. And might never have...Because van Gogh isn’t finished with Becca yet. He’s been searching for her all these years. And now that he’s found her, he’s got a plan to keep her ...forever.

My review:  Web  of Secrets by Susan Sleeman (Agents Under Fire #3)

Becca has kept some big secrets she has kept from everyone.  We do know that she has been a foster kid and her foster sister Molly disappeared decades ago.  She fears she was a victim of Van Gogh a serial killer who cut off the ears and murdered foster kids teenage girls.

Becca was almost a victim.  She is a expert on him and kept up on him.  He is now started killing again.

In this book their is good mix of cases and personal drama.  I like Becca and Connor and watched them grow closer.  I like how they grow as characters but remains a clean read.  The story works for me on all levels.
I wonder if Taylor a new member of there FBI team will have a book with her as a main character.  I would want to read it.

You can read any one of the three books alone, but I would read them in order to see how the different relationships start,

I was given this ebook to read for free by NetGalley and Bell Bridge Books.  In return I agreed to give a honest review of Web of Secrets.
Posted by rhonda1111 at 9:48 AM