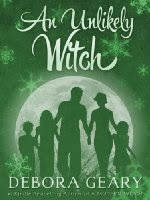 A toddler and a snowman.

Everyone in Witch Central knows about Jamie Sullivan's precog vision. The one he saw when he first laid eyes on the woman who would one day be his wife.

Now Nat and Jamie have it all. A fiery, adorable daughter, the kind of marriage that lasts to forever and beyond, and deep roots in the love, antics, and magic of Witch Central's leading family.

This book had me spellbound. Look forward to reading it, hated to put it down to talk on phone, hated it when it was over. I wanted to keep reading about the characters. They are my friends.

The plot was full of emotions dealing with fertility problems, dreams having to let go and find new dreams, hidden dreams. The triplets had an idea to assign everybody a name and they need to make a special dream come true for that person. Which they did a great job with a lot of thought of what that person needed.

I wanted to go swimming in the ocean in Dec. with everybody and have so much fun as they were having. They truly are a big family inviting everyone one to be part of it. When one person has a problem they all want to help each other. The love and caring are wonderful between everyone.

The setting mostly is Berkley, California in Dec.

The pacing of the story was riveting. I did not want to put it down even when I had finished it. June will be along time for the next book in the series. Debora has spoiled us with books sooner than six months.

This is a wonderful series of books. Clean reads with lots of interesting characters and talents. Some even magical. A community that makes you want to be a part of. Lots of drama, love and family.

I was given this ebook to read and asked in return to give honest review of it. I would have bought this book and the next even if I stop receiving free copies I love this series and reread the stories again and again.