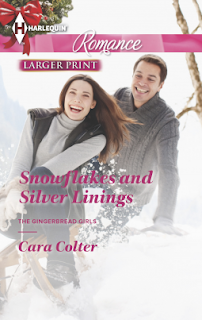 
A wedding guest from her past…

After a rocky year, Casey Caravetta pulls herself together and puts on a smile for her best friend's Christmas Eve wedding. However, she hadn't expected to see Turner Kennedy, the first man to break her heart.

Special Forces commando Turner is now hard, dark and dangerous, tortured by his experiences of war. Coming face-to-face again with beautiful Casey is a painful reminder of the path he might have taken.

Back then they were living on borrowed time, but now—with a sprinkling of holiday magic—they have a another chance…if only they're prepared to believe it!


MY Review: Snowflakes and Silver Linings by Cara Colter

This is charming Christmas story. The characters are likeable and you want things for them to workout.
a little action but most of story is about relationships in the past and the now.

They are gathered together to get the Gingerbread Inn opening for the Christmas Eve wedding.
Casey has had a tough life. She is a scientist. She has decided to give up on love and have a baby by herself.

Turner job is top secret. He has been asked by his friend to help and since he was in the states he agreed. His last mission went bad. He has to make some choices now. He has not been sleeping well.

Years ago Turner and Casey had spent 3 days playing together. Turner had told her that he had only the three days to give her. He was deploying then and he could not tell her. Now is the first they have seen each other since that time. They both have changed.

I smiled at quite a few scenes in the story. Their is a cute dog and little girl that touch me.
This is a quick clean romance story.

I was given this ebook to read and asked in return to give honest review of it by NetGalley and Harlequin.
Expected publication: December 3rd 2013 by Harlequin Romance ISBN:0373742711 256 pages
Posted by rhonda1111 at 8:47 AM