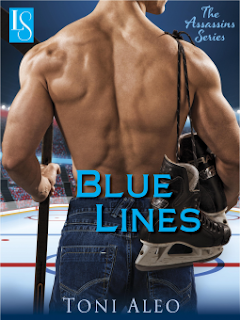 Opposites do more than just attract in Toni Aleo’s latest Nashville Assassins novel about a very bad boy and the good girl he can’t resist.

The instant Piper Allen sees Erik Titov, she wants him—wants his rock-hard body, sure, but the strength and mystery that lie behind that superstar hockey jock demeanor, too. So when he sidles up to her at a bar and slinks his arm around her waist, she’s lost. What follows is the wildest night of her life . . . followed by inevitable heartbreak the next morning. And then, a few weeks later, a very big surprise: two blue lines on a pregnancy test.

Only a check to the head could make Erik fall for a nice girl like Piper. But since their crazy-sexy night together, he’s been trying to forget about her alluring body by falling into bed with every woman in Nashville, and it’s not working. So when Piper shows up at his house with a baby-bomb to drop, it doesn’t take much for Erik to suggest the nuclear option: marriage. While it’s supposed to be all for show, the second they say “I do,” the ice between them starts to melt into sizzling steam.

I liked the storyline. I like the characters. at first I did not like Erik but the more I learned about him the more I liked him. I also liked seeing the characters from other novels in the Assassins series back to see what they have been doing. The pace of the story moved right along.

The things I don't like about the story is all the sex scenes and swearing.

The plotline we do see is a one night stand that leads to unplanned pregnancy. Erik never plans on having a father and all of a sudden he finds out that in three months he will be one. He also gets in trouble with the Assassins team because of all his catting around. So he talks Piper into a temporary marriage to save his job and family. Piper is also his sister-in-law.

Piper is a talented artist. She changes careers often. She has loved Erik for a long time. She believes in him even when he doesn't. She hides her pregnancy from everyone for a long time. Erik never answered her phone calls.

Erik is a good hockey player but he cats around a lot especially after sleeping with Piper the one time. In fact he is on a lot of magazines with different women and all over the place. 5 different ladies say he is their baby's father.

The Assassins are a professional hockey team. They are close together with each other. The owner Elli is also one of Piper's good friends. Elli's husband Shea is team captain. Erik's brother is on the team too. Piper's best friend is marrying a Assassin too.

I skipped over the love scenes but it is hard to skip over all the swearing.

I am undecided on wanting to read the next book. I really like the series except for a few parts.

is the author of the Nashville Assassins series:
Taking Shots
,
Trying to Score
,
Empty Net
,

Lines
. When not rooting for her beloved Nashville Predators, she’s probably going to her husband’sand son’s hockey games and her daughter’s dance competitions, taking pictures, scrapbooking, or reading the latest romance novel. She lives in the Nashville area with her husband, two children, and abulldog.

This is a free short story. It is a glimpse of Shea and Ellis family life. It is also a little bit of Piper's character. It was fun to read.
Posted by rhonda1111 at 10:41 AM