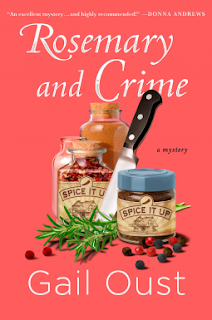 
Piper Prescott, a transplanted Yankee living in the South, has got her sass back. She might be down, but don’t count her out. “Change of life?” she asks. Bring it on. Recently divorced, Piper decides to pursue a dream she’s secretly harbored: owning her own business, Spice it Up!, a spice shop in her adopted hometown, Brandywine Creek, Georgia. But Piper’s grand opening goes awry when the local chef who’s agreed to do a cooking demo is found stabbed. Not only did Piper find the body, she handled the murder weapon and doesn’t have a witness to her alibi, making the case look like a slam dunk to brand new police Chief Wyatt McBride. Desperate to uncover the truth—and prove her innocence—Piper enlists the help of her outspoken BFF Reba Mae Johnson to help track down the real culprit. The pair compile a lengthy list of suspects and work to eliminate them using their own creative brand of sleuthing techniques including stakeouts, breaking and entering, and one very unorthodox chocolate pie. When Piper narrowly avoids being a victim of a hit-and-run, she knows she’s getting closer to the truth, but can she catch the killer and clear her name before she becomes the next victim?

A captivating start to a new series featuring an unstoppably fabulous new crime-solving heroine, a colorful cast of small town characters, and more than a pinch of Georgia charm, Rosemary and Crime is sure to delight fans of Donna Andrews and Jessica Beck.


My Review: Rosemary and Crime by Gail Oust

I like Piper Prescott. She is starting a business after her divorce. She is feisty. A good mom. Her best friend is Reba Mae Johnson. She is a character you want things to workout for her and you want to see what happens next in her life.

The plot is the day of her Spice it Up grand opening. She goes to the restraint where the chef works who is going to be doing a cooking demonstration and make sure everything is going as planned. She finds the door open and the chef is dead on the floor. Outside the restraint she finds a knife and picks it up and drops it by the body.

The new sheriff in town thinks she is the main suspect. Especially when her alibi turns up missing. Chief Wyatt McBride does not get along with Piper's ex-husband.

Piper and Reba are looking into who might have a motive to kill the chef. They try different stakeouts to find what people are doing but end up being caught by McBride.

Their is lots of humor, characters that I like, lot of suspects, motives and a small town feel to the story. There is suspense to the story you don't know till the end who the murder is and why.

The pace of the story was good. It keeps your attention with every day life plus trying to figure out who the real killer is.

I would read another story about Piper Prescott in the future.

I was given this ebook to read in return asked to give honest review of it by Netgalley and St. Martin