Dead by Wednesday by Beverly Long 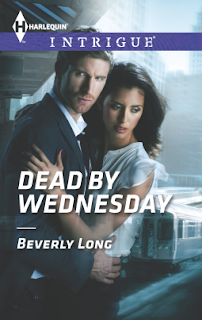 As the minutes tick by, the body count rises in Beverly Long's Dead by Wednesday

With no leads, no witnesses and four teenage victims, it's a race against the clock for Detective Robert Hanson to catch a vicious serial killer. But he gets thrown slightly off course when Carmen Jiminez asks for his help. Fiercely independent, the pretty pregnancy counselor is the only woman who has ever tempted Robert to give up his freewheeling bachelor life. Yet protecting Carmen from mysterious "accidents" and vengeful clients is just as difficult as winning her trust. And the only way he can keep her and her brother safe is to conceal a wrenching secret—one an obsessed killer can't wait to use. Now Robert's newfound family is right in harm's way, and time is almost up….

My Review:Dead by Wednesday by Beverly Long

Dead by Wednesday was pretty suspenseful. It was easy to figure out who the bad guy was but we did not know who he was or why he was killing teenage boys. Still it was a suspenseful.

I liked the characters. Especially Carmen. She has raised her brother since he was young. Her job was to help teenage girls. She was a believable.

Now Robert's case I wonder at how fast he changed his ways, falling hard and fast for her. Robert is a cop who is attracted to Carmen for months. Especially when they danced at their friend's wedding. She did not want to dance again with him.

Raoul is Carmen's teenage brother. Raoul was being bullied by older bigger boys. Who thought they were tough. Really two bigger boys ganging up on younger smaller boy is not very brave. It happens too often in real life.

The plot main path is a serial killer has killed 4 teenage boys on Wednesday for the past four weeks. They don't seem to have anything in common. They don't want a 5th dead teenager. So the police are working hard on figuring out the killer. So it is a race of the clock.

The pace of the storyline is pretty fast. You don't want to stop reading it.

Their is lots of drama, police work, some action and one love scene that I admit skipping over.

I was given this ebook to read and review from Netgalley and Harlequin.