Miz Scarlet and the Holiday Houseguests (A Scarlet Wilson Mystery) 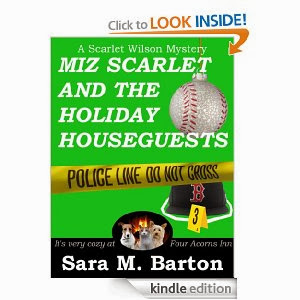 A teenager turns up dead in the woods just a few days before Christmas, brutally murdered....Short-handed, the homicide team can't seem to get a handle on the case....Sometimes the only thing for a good friend to do at a time like this is step in and rescue the hero in time for the holiday.

Homicide investigator Laurencia Rivera, better known as Larry, has her hands full a week before Christmas, when her long-divorced parents announce they are joining her for the holiday. Desperate to avoid World War III, Larry contacts Innkeeper Scarlet Wilson. All she needs is to rent a room for her father at the Four Acorns Inn. There's only one problem -- Larry's mother is offended that her ex-husband gets all the pampering and she's determined to kick up a fuss.

How is the overworked Connecticut state trooper supposed to find a killer when she's so distracted by her own family problems? As things heat up at work, little things start to suggest that Larry's got something bigger than bickering parents to worry about. Secrets from her past begin to creep into the lives of people Larry loves, putting everyone in danger. Who can she trust when the chips are down?

"Miz Scarlet" may be an amateur sleuth, but that doesn't stop her from going head to head with a killer bent on revenge! With some help from Larry's former partner, Max, and her boyfriend, Kenny Tolliver, Scarlet Wilson is determined that it's going to be a great Christmas, if she can just keep all the guests at the inn alive....(

My Review: Miz Scarlet and the Holiday Houseguests

I have enjoyed all three Miz Scarlet books I have read. Lots of things happen around Miz Scarlet.
There is a lot of mystery, action, romance, witty banter, humor and fun characters abound. Also is a clean read.

A few of the characters have nicknames from their youth taken from the game clue which adds to the fun light side of them. Miz Scarlet and her brother still argue and bigger like they did growing up.

Miz Scarlet runs a different motel or bed & breakfast. A lot of her guests come while they are sick or have no where else to stay.

It is Christmas time and Larry asks for a favor that asks if her father can stay their for Christmas. Both of her parents want to come and they are divorced and fight a lot. Soon the inn is full with good and bad guys.

This is a short 111 pages novella that you can buy alone or part of Killer Christmas by Sara M. Barton that has two other good mysteries in it. Plus it will be FREE ON AMAZON 12/19, 12/20.
I actually got both for free on different places. 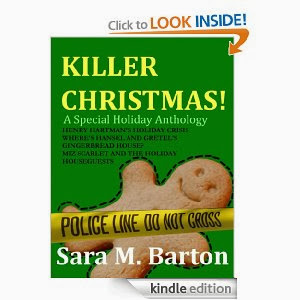