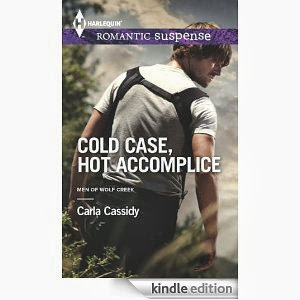 Roxy Marcoli cares about three things—her restaurant, her sisters and her aunt Liz. When Liz disappears, she's forced to turn to shameless playboy cop Steve Kincaid. Every time the sexy detective turns on the charm, he gets Roxy's hackles up.

Despite his reputation, Steve is no ladies' man. His casual flirting hides the pain of an unbearable loss. As they search for clues, he discovers what lies beneath Roxy's prickly exterior and sharp tongue. His desire grows, and so does his fear. Because it's not just Aunt Liz the killer wants—but Roxy, too.

I was left with some questions that I would like to bring up but it would give up too many secrets. The suspense was good. It keeps you guessing about where the missing are. Who took whom? Who was after Roxy? You don't know who to trust.

I like the characters. Roxy is the oldest of three girls. She feels she has to be the one to hold it together for her sisters. She is feisty. Knows what she wants and goes for her dream. She opened her own restraint the dollhouse. She never plans on getting married.

Three of her customers come in first thing three days of the week are detectives. Steve always flirts with her. When Liz her Aunt is a half hour late delivering her bake goods and doesn't answer her phone she sends her sister over their. Liz is not their but the bake goods are ready, her car is there, and her purse is there.

They tell her that till she is missing 24 hours they can't do anything. Steve does go over to see and look around.

When someone comes after Roxy to they don't know if it is same one who took her Aunt Liz.

I can't wait for the next book to come out and answer my questions that I still have.

There are a couple of sex scenes in the book. Their is also some Amish characters in the story.
I was given this ebook to read and in return asked to give honest review by NetGalley and Harlequin.
Publisher: Harlequin Romantic Suspense (December 1, 2013) 288 pages ISBN: 9780373278497
Posted by rhonda1111 at 12:56 PM