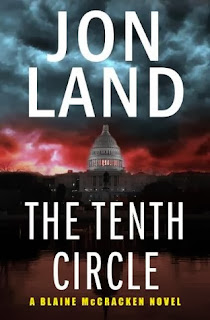 1590: An entire colony of British settlers vanishes from their settlement on Roanoke Island, seemingly into thin air.

1872: The freighter Mary Celeste is found drifting at sea off Gibraltar, its entire crew and passengers gone missing without a trace.

What if there’s a connection between two of the greatest historical mysteries ever?

That’s the question facing Blaine McCracken in the wake of pulling off the impossible in Iran. McCracken has rid the world of one terrible threat only to return home to face another in the form of Reverend Jeremiah Rule, whose hateful rhetoric has inflamed half the world, resulting in a series of devastating terrorist attacks. But Rule isn’t acting alone. A shadowy cabal is pulling his strings, unaware that they are creating a monster who will soon spin free of their control.

Finding himself a wanted man, McCracken must draw on skills and allies both old and new to get to the heart of a plot aimed at unleashing no less than the tenth circle of hell. A desperate chase across country and continent takes him into the past, where the answers he needs are hidden with the missing Roanoke colonists and among the contents of the Mary Celeste’s cargo holds. As the clock ticks down to an unthinkable maelstrom, McCracken and his trusty sidekick, Johnny Wareagle, must save the United States from a war the country didn’t know it was fighting, but that it might well lose.

About the Author
Jon Land has written twenty-nine novels. His first series titles were the Blaine McCracken Novels, and he is also the author of the Ben and Danielle series and the Jared Kimber lain series. The first three books in his Caitlin Strong series—Strong Enough to Die (2009), Strong Justice (2010), and Strong at the Break (2011)—have all garnered critical praise with Strong Justice being named a Top Thriller of the Year by Library Journal and runner-up for Best Novel of the Year by the New England Book Festival. Pandora’s Temple, a 2012 McCracken novel, won the International Book Award for Best Thriller/Adventure, and was nominated for a 2013 Thriller Award for Best E-Book Original Novel. Land lives in Providence.


My Review :The Tenth Circle (Blaine McCracken #11) by Jon Land

This is my first Jon Land book but not my last. I enjoyed it and did not want to stop once I got into the story. Their is a lot of violence. But they are trying to stop terrorists.

The Plot I thought it was pretty good how they took two different mysteries in history and tied them together to make a weapon that could bring down the U.S. Government and make it very believable and real. It was action, drama, thriller all in one.

The rest home scenes had me laughing and cheering. I wanted to share those scenes with somebody.

The characters are well written and developed. It is the 11 book in the series so I expected that. Though I did not realize before I read it that fact. I liked Blaine McCracken. I was not sure who the bad and good guys were. I really liked one of the twists at the end of it.
I want to go and read the other 10 books in the series and find out more about McCracken and his friends.

The setting for the book was all over the United States and the world. Time was 1590 to the modern year. It tied the different times and incidents together really well.

The pacing of the story was good. It revealed the truth a little bit at a time and you did not want to put the book down till you found out all its secrets.

If you want a action packed book this makes a great read.

I was given this book to review and asked to give honest review of it in return.