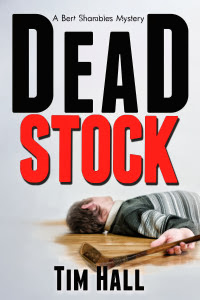 Synopsis:
Meet Bert Shambles, a perpetually confused young man whose life continually mirrors his surname. He is stuck back in his suburban Long Island hometown, enduring a three-year suspended sentence for an act of chivalry gone terribly wrong. He works part-time at a church thrift shop and makes extra money by selling “dead stock”—vintage clothes that have never been worn—to a local boutique.

On a routine pick up for the thrift shop, Bert learns that the widow of a recently deceased pro golfer is offering a reward for the return of her dead husband’s favorite putter—and an even bigger reward for proof that her husband was murdered. Bert jumps at the chance, and soon finds himself being chased by a violent, van-driving maniac, romantically involved with a mobster’s daughter, and quite possibly being set up to take the fall by his probation officer and crazy ex-girlfriend. As the forces of good and evil close in around him, Bert must race to clear his name and discover the truth so he doesn’t wind up in prison…or worse.

Filled with twists, turns, and unforgettable characters, and propelled by a truly lovable hero and wicked sense of humor, Dead Stock heralds the arrival of a wonderful new mystery series.

Tim Hall has had a long and varied career in the underground and independent press as a journalist, author, and as co-founder of the Outsider Writers Collective. He has collaborated with many illustrators and fine artists, including with Emmy Award winning artist Dean Haspiel on “The Last Mortician”, published by Tor.com in 2010 (link here). Tim grew up on Long Island, where his Bert Shambles mysteries are set. He lives in New York City.

Bert is a likable character who's life is a mess. He lives in a boarding room with no kitchen. He is on parole for three years. He is not happy to be back on Long Island for the next three years. He gets involved in one mess after another.

The mystery is pretty good and leaves you guessing about what all is going on. About who is chasing him and why.

Their is a lot of humor about what is going on in Bert's life. He gets banged up a lot falling out of windows, being chased
and trying to help the women he meets along the way.

The pace is pretty good. Every time something happens and evens out something else goes wrong in his life.

I wanted things to workout for Bert and his friends. I would read another book by Tim Hall in the future based on Dead Stock.

I was given this ebook to read for review purpose and to be part of Dead Stock's book tour.

Every stop: a free signed paperback with a corrected manuscript page tipped in

December 6 – Escape With Dollycas Into A Good Book - Interview, Giveaway

December 8 – Escape With Dollycas Into A Good Book - Spotlight