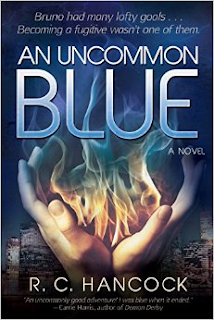 In a society where the color of a person’s palm determines their social class, Bruno goes from favored to fugitive when he kills a Royal Guard to save a boy’s life. If he wants to survive, Bruno has to learn to accept the lower colors. A thrilling blend of fantasy and adventure perfect for readers everywhere.
Paperback: 288 pages
Publisher: Sweetwater Books (December 9, 2014)
Language: English
ISBN-10: 1462114881
ISBN-13: 978-1462114887

RC (Really Cool) Hancock began his writing career with a story about a dead cat which his second grade teacher thought was brilliant. Convincing others of his literary genius has taken longer than expected, but along the road he has acquired a lovely wife, four entertaining ankle-biters (who, thankfully, look more like their mother), and a degree from BYU in Recreational Management & Youth Leadership (which means he’s really good at having fun.) An Uncommon Blue is his first novel.

Uncommon Blue was a nice surprising fresh look at judging looks. It is a fantasy YA story. It had characters that I liked. I like what Bruno became. This has a lot of action, violence. It is a pretty clean read.
Bruno was a star rugby player. He is also from the Blue class which is the higher class. His father is a surgeon. He is a good looking guy that the girls like.

Bruno finds out a kid Baptiste is looking for him when he finds him he is tricked to shaking hands which makes their colors merge. Which for a blue is terrible. for the green it is a higher status. A royal guard comes and he is going to kill the kid.
Baptiste was tricked into doing it. Bruno tries to save Baptiste and the guard ends up dead. Bruno is on the run.

Bruno has his eyes opened to what the other colors mean for the different people. He meets different colors and see what they go through. He tries to help.

I guessed where the ending of the book would go. I want to read the next book in the series if their is one.

These people have fire that comes through their hands. Blue pure is the best class. except for white that the missing King will have.
Than blue mixed, green and the poor class is red or orange. Each level has different jobs, education levels quality of food, medical or even police protection.

It is a fast paced adventure. Bruno keeps getting into trouble because he wants to help others. He does not want to die either.

The setting is a city that is guarded. You can't go to different color areas higher without a escort.

I was given this ebook Uncommon Blue to read so I can give a honest review and be part of its blog tour.

Rhonda, thanks so much for taking the time to read and review this! I'll be sure to contact you when book 2 is ready for tour. :)