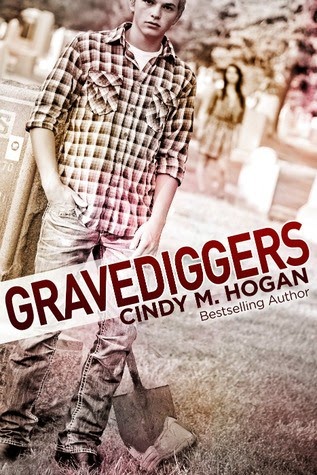 Seventeen-year-old Billy thinks his father’s murder will never be solved—until he stumbles across an old ammo box while digging a grave in his small-town Tennessee cemetery.
What he finds leads him to question everything he knows, and his search for answers will uncover more than he bargained for: lies, secrets, and conspiracies—and behind them all, a dangerous truth.
Young Adults, teens, and adults will love this exciting suspenseful mystery with a dash of romance. You won’t want to put it down.

Gravediggers is a exciting mystery that is full of emotional range.  It is a mystery, drama, YA, and romance all in one story.  I liked the characters.  I wanted to  help Billy find his answers. Wanted to yell at him at times. and root for him at other times.

Billy is seventeen year old. His father was killed by a hit and run driver when he was only eight years old. Billy wants to be a FBI Agent so he can solve his father's murder.  He finds a old ammo box full of mystery.  He decides to investigate it with the help of his best friend.

Billy finds himself not trusting anything he has been told or anyone.  He gets so full of anger, and wants to get even. He crosses lines little bit at a time.

I wanted more to the book. I was not ready to put the book down. It brought tears to me during reading.

I like reading stories written by Cindy M. Hogan.  I want to read more stories from her in the future. I have only read six of her books and have enjoyed all of them.

I was given this ebook to read by author so I could give Gravediggers a honest review.
Posted by rhonda1111 at 11:42 AM