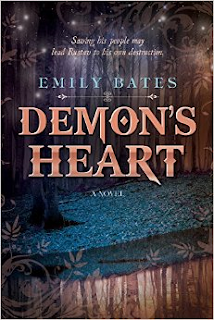 Young ruffian Rustav is determined to escape his abusive uncle and hated homeland, even if it means braving the demon-infested forest. His escape is halted, however, when a race of legendary beings reveal him to be the country s fabled heir. As the people rally around him, Rustav teeters precariously between raising his people from the dust or destroying them from the inside.
Paperback: 272 pages
Publisher: Sweetwater Books (December 9, 2014)
Language: English
ISBN-10: 1462115152
ISBN-13: 978-1462115150

Emily H. Bates grew up in Northern California, where she spent much of her young life happily closeted away with a book. She graduated from Brigham Young University with a degree in German Linguistics, married a dashing young man from her study abroad in Germany, and now writes novels in English. She currently resides in Washington with her husband and her very busy daughter.

I was drawn into the story straight off. I cared about Rustav and the characters that he met. I wondered about his backstory. Demon's Heart got into my heart. I was not ready for the adventure to end. I want to see what happens next. Demon's Heart has humans but it also has demons, A legendary race of people. Plus other characters. A evil king, that is weakening his kingdom. A fable about the true King bringing everyone together. It is a clean

This is full of drama, relationships, suspense, action and fantasy all centered on Rustav a teenager who has had a rough life. He was beaten by his Uncle till he ran away one day to a mountain village. Rustav stayed to heal before going on through the forest where demons were said to live.

Rustav made friends in that village his first since he was young. Dantzel who lived with her mother. Her father was taken away over six years ago by the king.

The setting is diverse from mountain village, to cities . Even a hidden city. Transportation was walking or carts pulled by horses.

I would think probably middle school and up would like Demon's heart. Fans of Ranger Apprentice. Harry Potter

I can't wait for the next book in the series. I will be looking forward to reading it.

I was given Demon's Heart to read so I could give honest review and be part of it's blog tour.

EXCERPT:
From the author: Dantzel is selling produce from her family’s garden on market day when she notices a ragged, weary stranger on the edge of the square. A moment later, a group of the king’s Guards start pushing their way through the square and approach her stall.
=====
“Good afternoon, miss,” said one of the red-cloaked Guards, winking at her in what he obviously thought was a winning manner. He must have been assigned to the area recently; Dantzel hadn’t yet had occasion to be harassed by him.
“Good afternoon,” Dantzel replied curtly. “What can I offer you today?”
The Guard leaned across the counter, his sleazy smile broadening. He reached out to touch her arm. Dantzel jerked away just as he moved to tighten his grasp around her wrist.
“Not for sale,” she said coldly, dropping all pretense of civility. “Maybe you should try another village.” Her voice held a hint of a threat, causing the young Guard to raise an eyebrow at his snickering comrades. Dantzel’s blood was racing, and she fought to keep the fear off her face. They weren’t usually so openly forward with her. Usually, it was a few taunts about seeing her father cleaning the stables in the king’s court or a snide comment about the dirt on her worn-out dress. But this one seemed to be fresh from training, trying to prove his manhood to his new friends.
Turning back to her with a confident smirk, the Guard picked up a handful of berries and popped a few into his mouth. He chewed slowly and deliberately, apparently enjoying the outraged look on Dantzel’s face. As angry as she was, Dantzel didn’t dare say anything. Two-syllable peasants had been arrested for less, and her mother needed her help in the garden. She clenched her teeth, stepped back, and looked at the ground. Harsh, crass laughter surrounded her; she saw several hands dip into her boxes of produce, and crude comments echoed in her ears no matter how desperately she tried to block them out.
“Can I help you, gentlemen?”
The dry, raspy voice sounded right beside Dantzel’s ear, and she gasped and flinched away. The ragged stranger stood next to her, a wry half-smile now gracing his bruised face. The laughter from the Guards doubled.
“What are you going to do?” The young Guard smirked as he gave the stranger a once-over. “It looks like you already lost one fight today, beggar.”

“Beggar? I’m not the one stealing food,” the stranger said coolly, his words sliding perfectly into the arrogant rhythm of the valley. Dantzel curled her hands into fists and opened her mouth to intervene, but the valley boy pressed one hand against her wrist under the stall. She jerked away but remained quiet. “What do you think the earl of Feaul will do when he finds out you’ve been brawling with his oldest son?”
Earl of Feaul? Dantzel glanced warily at the battered but fine clothing; she wasn’t convinced, but the Guard stepped down a little. “Why would the earl’s son be wandering around this backward mountain village?” he demanded, his eyes betraying his doubt.
“Does it matter?” The boy definitely had the arrogant stance of nobility. “I doubt you’ve been out of the academy long enough to keep them from yanking your uniform at a moment’s notice. All I have to do is tell them you’ve been abusing your privileges. The earl will have a syllable cut from your name by sundown, and you’ll be out working the fields with the rest of those two-syllable dirt farmers.”
The Guard was starting to look like he wanted to give the boy another black eye, but his friends were beginning to mutter among themselves.

“Come on,” one of them said. “It’s not worth the trouble.”
The Guard didn’t move for a moment; then, he gave Dantzel a spiteful glance and tipped a basket of blackberries onto the ground. “Ugly mountain weasel, anyway,” he muttered, stepping purposefully in the pile of spilled berries as the Guards retreated.
Demon’s Heart” blog tour schedule: