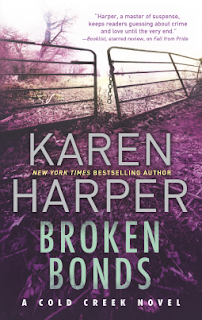 Haunted by the past…

Cold Creek is a place with a dark history, especially for the Lockwoods. Now adults, the three Lockwood sisters are still recovering from the events that led to the destruction of their family when they were children. Determined to move forward, Tess and Kate are making fresh starts, ready to put bad —even deadly —memories to rest and settle happily in the small but booming town. And they're hoping their older sister, Charlene, can do the same.

Char is back in town seeking comfort as she figures out her next move. A social worker used to difficult situations, she soon runs afoul of some locals who think she's sticking her nose where it doesn't belong. She's certain something sinister is being covered up, and when she witnesses Matt Rowan being run off the road, she knows she's right.

Working together, Matt and Char figure uncovering the truth will be dangerous, but living in Cold Creek won't be safe for any of them until its secrets are revealed.

This is the #3 in Cold Creek series and it ends things in a good way. I like all 3 of the Lockwoods sisters. They are smart, make a difference, quick thinking. They don't wait around to be rescued.

Charlene is the middle child. She is a social worker. Trying to get kids that don't go to school full time to school. She goes up into the mountains and tries to work with the families to let their kids go more often.

Matt Rowan is on his way to visit the family of one of his workers he was close to that was killed. He is hit by a truck and is close to going off the cliff. Charlene sees and works to save him using jump ropes tied together. Matt has no idea who would want him dead.

Matt and Charlene bond very fast. After Matt takes her out to dinner and back home someone tries to shoot them with a arrow but they moved apart at right moment. They are not sure who the target was.

Char and her two sisters visit with their cousin Grace at their cult compound and figures that they were spied on. They want to get their cousin and family out of the cult.

Char never know where she is going to spend the night. She just rented a cabin and then the arrow was shot and no one wants her to stay by herself while she might be in danger.

I was not sure who was doing what till they revealed themselves.

I was given this ebook to read by Net Galley and Harlequin. In return I agreed to give a honest review of Broken Bonds.
Posted by rhonda1111 at 11:50 PM