After an award-winning career in television and magazines, Craig Chapman is pursuing his passion: telling the real stories of real food and the people and cultures that bring a dish to life. Based on his popular Create TV series, these recipes take you behind the scenes and into the kitchens of chefs who are using food to change the world. 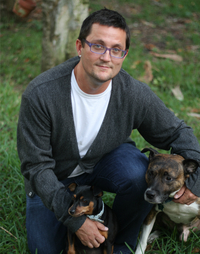 Craig Chapman published his first magazine at the age of 15, which was a handwritten, photocopied punk rock fanzine. He moved to New York after college and worked as a television and film Production Manager at Nickelodeon, MTV, VH1, Time Inc., and more. He also took time to work as a magazine Editor developing an MTV Magazine for Hearst, as a Fashion and Beauty Editor at InTouch Weekly during their inaugural year, and as a Lifestyle Editor for Seventeen.
Chapman owns OEG Media LLC which creates unscripted television, film, and multi-platform digital projects that highlight the lifestyle, drama, comedy, and challenges of real life. He is also the Founder and Producer of the national brand Real Food Real Kitchens which includes a TV series, yearly magazine, and daily web site. Real Food Real Kitchens is all about ‘Family, Food, Culture and History’; telling the story of a dish and the family and culture that bring it to life.

This is not a regular cookbook with just a picture of dish and simple recipe, It is so much more. It has pictures of New York that I love seeing.  Has lots of real people, their background of cooking and race and traditions. I love seeing the different people sitting around their kitchen tables.

I don't cook that much anymore from scratch but it makes me want too.  There is such a range of food, some ingredients  I had to look up what they were. Like oxtail  I did not know it used to be the oxen's tail now usually a cow's tail. Fuzzy squash looks like zucchini  with fuzz that is a gourd.
so many new recipes and flavors to learn about.  Too bad the book could not come with samples!
When the different people are talking about favorite dishes they remember the different family members who taught them to cook the dish and wanting to pass on the traditions.

This book is a must for people who love to read cookbooks, about people and cultures, plus you learn a little about New York.  I was surprised to learn about farms on roof tops.

I really enjoyed learning about the people, the traditions their love of family, food.  They make cooking fun and not a chore.

I was given this cookbook to review from Cedar Fort Publishing and in return agreed to give a honest review of Real Food, Real Kitchen and part of its blog tour.