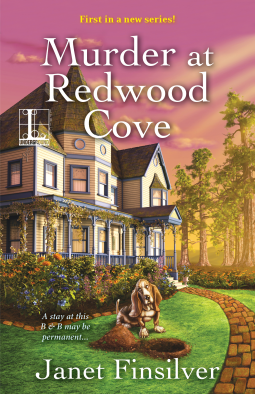 If it weren't for the fact that she's replacing a dead man, Kelly Jackson would love her new job managing the Redwood Cove Bed and Breakfast on the coast of Northern California. But Bob Phillips did plunge off the cliff to his death…and Kelly's starting to think it may not have been an accident. Bob's retired friends—The “Silver Sentinels”—are also on the case, especially when Kelly is attacked…and another body turns up. Kelly has her hands full with overseeing the B&B's annual Taste of Chocolate and Wine Festival, but she's also closing in on the killer…who's ready to send Kelly on her own permanent vacation…
My review: Murder at Redwood Cove by Janet Finsilver

I would love to come visit Redwood Cove Bed and Breakfast.  accept for the murders it sounds charming.  I like all the characters.  They care about each other and for doing whats right. The Silver Sentinels are great.

Kelly Jackson has been flown into manage the Bed and Breakfast after the manager died.  Some don't think Bob Phillips death was a accident.  That he knew the cliffs and would not have fallen.  Kelly starts to follow Bob's path the day he died.

Bob belonged to the Silver Sentinels.  It is a group of retired friends that protect the areas, and things.  They do what they can and meet at Redwood cove for there meetings.  I would love to find out more about them in the future.

There is a lot of drama, danger, mystery and chocolate.  The B& B is also getting ready to host a Taste o Chocolate and Wine Festival.  So lots of yummy deserts.

I would love to read the next book in the series.  I enjoyed reading Murder at Redwood Cove.

I was given this ebook to read for free by NetGalley and Kensington.  In return I agreed to give a honest review of Murder at Redwood Cove.
Posted by rhonda1111 at 3:59 PM