Second Chance Colton by Marie Ferrarella (The Coltons of Oklahoma #4) 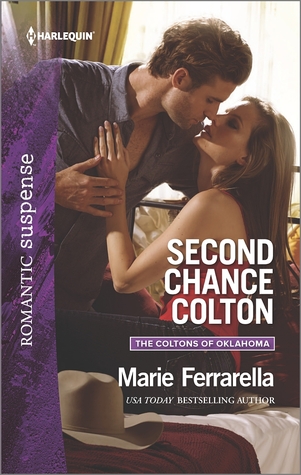 Scandal leads to death on the Colton ranch in the latest from USA TODAY bestselling author Marie Ferrarella.

When murder strikes his family's ranch, Detective Ryan Colton follows the evidence…straight to his sister. Instinct tells him she's innocent. But once her DNA is found at the scene, Ryan goes head-to-head with the forensics expert he'd hoped to avoid. Susie Howard—the beautiful woman he once loved…and left.

Seeing Ryan again has Susie doubting everything, especially her resolution to forget the sexy, rugged cowboy cop. If her intuition is wrong, then the real killer is still at large and has the Coltons in his sights. Teaming up with Ryan is the only way for him to save his family—and his second chance with her.
My review:  Second Chance Colton by Marie Ferrarella (The Coltons of Oklahoma #4)

This is Ryan Colton's story.  He gets the DN A testing from the window broken at his family's ranch barn window and does not like the results says it is his sister Greta's DNA. He asks for the test to be run again.

Ryan is a detective in Tulsa Oklahoma.  His family owns a big ranch and has money.  His ex-girl-friend is the one who ran the DNA tests.  He broke up with her ten years ago when he was deployed again in middle east.

Susie Howard was heartbroken when she got the dear John letter.  She has kept some secrets from him.  She decides to help figure out what is going on with Greta when she is charged.

Ryan feels bad when he has to ask Greta to come into the police station to talk to him.

This is full of mystery that is easy to figure out part of it.  Lots of drama, one love scene, makes me want to read the next book in the series.  Did not put book down till I finished it.

I was given this ebook to read for free by Net Galley and Harlequin and in return I agreed to give a honest review of Second Chance Colton.