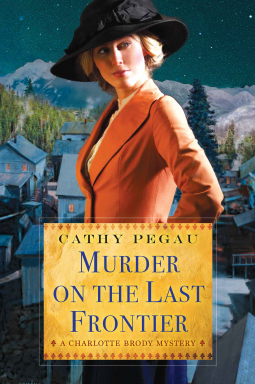 There's many who feel the Alaska Territory is no place for a woman on her own. But Charlotte Brody, suffragette and journalist, has never let public opinion dictate her life choices. She's come to the frontier town of Cordova, where her brother Michael practices medicine, for the same reason many come to Alaska—to start over.

Cordova is gradually getting civilized, but the town is still rougher than Charlotte imagined. And when a local prostitute—one of the working girls her brother has been treating—is found brutally murdered, Charlotte learns firsthand how rough the frontier can be. Although the town may not consider the murder of a prostitute worthy of investigation, Charlotte's feminist beliefs motivate her to seek justice for the woman. And there's something else—the woman was hiding a secret, one that reminds Charlotte of her own painful past.

As Charlotte searches for answers, she soon finds her own life in danger from a cold-blooded killer desperate to keep dark secrets from seeing the light of day… My review:  Murder on the Last Frontier  by Cathy Pegau (A Charlotte Brody Mystery)

This is book one of A Charlotte Brody Mystery.  It starts with Charlotte on the boat just  arriving in Cordova,  Alaska Territory in 1919.  Her brother Michael is there to meet her.

Charlotte is single.  She is a reporter who plans on writing articles about the women of Alaska. She is also running away from her past.  Charlotte is a feminist, strong willed and blunt.  She makes waves.

Dr. Michael Brody has secrets he has kept from his family.  He is excited to see his sister.  Some of his patients are the local whores.  He is single.

Darcy is one of ladies of night she has been feeling sick and is one of Michael's patients is found murdered.

Charlotte feels drawn to figure out who killed Darcy and investigates for herself.  Charlotte even volunteers to help with her autopsy by taking notes while Michael does his job.

Plenty of drama, plenty of local color, plenty of danger and suspects.  Some very graphic scene with the autopsy.

I was given this ebook from NetGalley and Kensington.  In return I agree to give a honest review of Murder on the Last Frontier.