Her Holiday Protector by Lenora Worth (Men of Millbrook Lake) 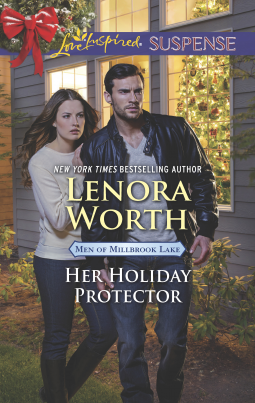 While investigating a murder at Rikki Allen's house, detective Blain Kent realizes the victim looks a lot like Rikki. Could the secretive widow have been the target? He wants answers, but Rikki is unusually cagey. When the killer comes after Rikki at a safe location, Blain finally gets the truth out of her: she's the daughter of Franco Alvanetti—the notorious crime kingpin. A by-the-book former marine, Blain has made it his life mission to put the Alvanetti family out of business. Yet he has to trust Rikki to protect her from a killer who wants her dead by Christmas.

My review:  Her Holiday Protector by Lenora Worth (Men of Millbrook Lake)

Full of suspense, drama , action.  It is hard to know who to trust until the very end. It is a clean read. It is good but at times confusing about who is doing what and why.

Rikki Allen comes home to her townhouse in time to hear a shot and someone run out of her house.  She finds her best friend dead.

Rikki is a widow who has distanced herself from her family after her husband died.  She keeps in contact with her mother but she has been ill. Her family is Alvanetti.  Known notorious crime family.  She has no proof of it.

Blain Kent is a police detective and is out running when he hears the shot and scream.  He knows Rikki is hiding something. but he plans on finding the murder.

When Blain takes Rikki to her family's mansion he realizes what she has been keeping from him.  He now knows he can't trust her but knows her family will protect her.

Someone wants to kill Rikki but ends up killing people around her instead.  She has no idea about who wants her dead.

This is the second book in the Men of Millbrook Lake series.  The only one I have read.  These friends meet and realize that they all have served in the military.

I was given this ebook to read by Net Galley and Harlequin.  I agreed in return to give honest review of Her Holiday Protector.