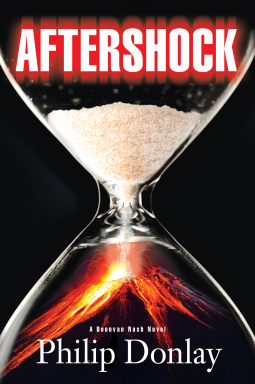 
The flames of Donovan Nash’s worst nightmare are fanned to life when Stephanie VanGelder, one of those closest to him, is kidnapped in the volcanic powder keg of a lawless Guatemala. With help from his inner circle that includes his estranged wife, Dr. Lauren McKenna, Donovan races headlong into a world of corruption and deception. Battling the kidnappers, as well as the deadly gas and lava from the impending eruption of a volcano, Donovan only has one chance to save Stephanie.
Amid earthquakes, volcanic ash, and lava, the rescue goes horribly wrong, and Donovan is forced to find a way for everyone, including a mysterious woman who holds the secrets to his past, to escape one of the most powerful forces on earth. Aftershock is the story of Donovan Nash, a man battling his torturous past, struggling to survive the volcano with those who matter most to him. In the face of impending death, Donovan must find the courage to endure a shocking revelation he’s sought for decades—a truth that will change him forever.

My review: Aftershock by Philip Donlay (A Donovan Nash Thriller #5)

Stephanie VanGelder was in Guatemala to take photos of a volcano that just erupted when her party was murdered and she was kidnapped.  She thought of Donovan as a brother.

Donovan Nash is a pilot that works for a company that lets scientists discover more about the planet.  Donovan used to be Robert Huntington a billionaire that the world blames him for the death of his fiance after she was kidnapped and murdered.  Robert faked his own death.  Only six people know who he is really.  He is determined not to lose another person close to him.

Donovan gathers a group to go find Stephanie.  He uses his plane with all the new technology and scientific tools to do what others can't do.

I did not want to put the book down.  It is fast paced thriller set in Guatemala.
I have read all the Donovan Nash books and look forward to reading more of Philip Donlay's work in the future.