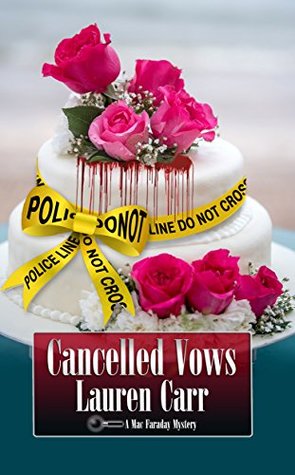 Police Chief David O’Callaghan and Chelsea Adams’ wedding day is fast approaching. Unfortunately, at the last minute, David discovers that there is one small problem to be taken care of before he can walk down the aisle—divorce his first wife!
Lauren Carr takes fans of the Mac Faraday mysteries to the Big Apple in this nail biting adventure. In Cancelled Vows, David, Mac, and Gnarly, too, rush to New York City to dissolve David’s marriage to an old girlfriend—and he’s got five days to get it done. When murder throws up a road block, it is up to David’s best man, Mac Faraday, and Gnarly, K9-in-waiting, to sort through the clues to get David to the church in time!

I look forward to new books by Lauren Carr so when I received this ebook last night I had to read it right then.  Cancelled Vows does not disappoint.  It is full of mystery, drama, humor and full of surprises.

I love the characters. Mac Faraday is a retired homicide detective who inherited 270 million dollars the day of his divorce unexpected.  He also found a half brother David O'Callaghan who is  Spencer police Chief. He was also left
Gnarly a German Shepherd who is smart. he was trained by Army and kicked out.  He can take bad guys out and eats anything. Gnarly is also a thief.

The plot is good.  I was not sure what would happen next.   David and Chelsea Adams were getting their marriage license when David found out he was married.  He did not know he had married anyone.  So David,  Mac and Gnarly flew up to New York City with divorce papers.  Chelsea was hurt and is not talking to David.  When they are up there they find dead body and trouble.  So the race is on to get David a divorce and prove he is not a murder before his wedding in just days away.

I did not put the book down till I had finished reading it.

I was given this ebook to read by the Author Lauren Carr and in return I agreed to give a honest review.