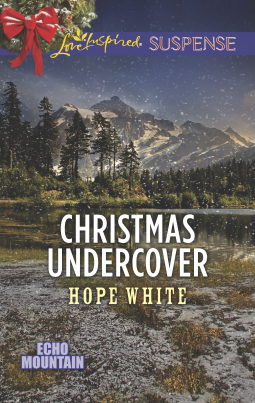 FBI agent Sara Vaughn believes a group of pharmaceutical businessmen are engineering drugs with deadly results. Her boss won't approve a sting operation, so she goes rogue—following the suspects on a hike in the Cascade Mountains to record evidence. But when Sara witnesses them murder one of their own, they target her. Saved by a handsome volunteer mountain rescue worker, Sara at first suspects Will Rankin is another bad guy hunting her. But when the widowed father of two risks everything to save her, she knows that Will is all that's standing between her and seeing Christmas morning.

Echo Mountain: Saving lives and finding love in the mountains of Washington State

I liked it.  Lots of Action, danger, romance,  darling little girls, prayer, heroes and characters you want to cheer on. Plus it is a clean read.

This is the fourth book in the series but the first one I have read. It can stand alone really well.

FBI Agent Sara Vaughn is supposed to be on vacation but she went undercover as a trail guide and witnessed a murder.  She took off in the dark and fell down the mountain.

Sara believes a drug company is going to go forward with a dangerous drug.  She thinks they need to be stopped.  Some of the executives of the company are planning a trip hiking on Echo mountain.  Her boss told her there was no case and to drop it.  She is stubborn.

Will Rankin sees a body and hurries to help but Sara thinks he is the bad guy.  Will is a single father of two little girls.  He is alone on the mountain to pray by himself.  He is a search & rescuer.

There is so much going on.  You never know who to trust.  Sara with her head injury retreats to hiding like she did when she was younger.  Sara also decides not to let people know she works for FBI until she can talk to her boss.

The setting is the Cascade mountains.

This a exciting book, a fast read.  That I wish it could have been longer.

I would be willing to read more books by Hope White in the future.

I was given this ebook to read for free from Net Galley and Harlequin. In return I agreed to give a honest review of Christmas Undercover.
Posted by rhonda1111 at 7:25 AM