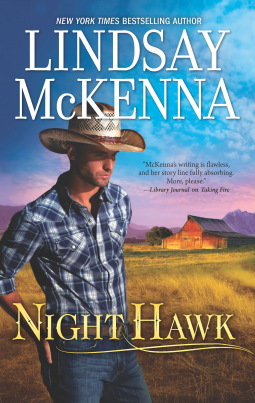 ONCE UPON A RANCH IN WYOMING…

After losing his comrade, Sergeant Gil Hanford thought a visit to the man's widow would be the decent way to honor his late friend. But Gil found more than comfort in Kai Tiernan—he had always secretly desired beautiful Kai, but a sudden, mutual passion helped assuage their grief…until duty reared its head, removing him from her arms, seemingly forever.

Four years later, Kai is starting over at the Triple H Ranch in Jackson Hole, Wyoming. Born a rancher, she is looking for a new beginning—but her new boss is unforgivably familiar. Kai has tried to move past the memory of what happened between her and Gil, even though she's never forgiven him for leaving her. But even as they begin their journey toward something new and oh-so-uncertain, a shadow emerges, determined to claim Kai for itself.

Good plot, likable characters.  Some new ones and plenty of older ones from previous books.  Lots of drama, mystery and romance.  A couple of love scenes that I skimmed over.

Kai Tiernan is a mechanic and wrangler.  She has been looking for a ranch job but no one wants to hire a female for the job.  Kai is a widow and she is a vet.  She wants to find a home.

Gil Hanford was in special force.  He is now the forman of a Triple H ranch in Jackson Hole, Wyoming.  He knew Kai in the military in fact they were lovers for five days in Afghanistan. Before he left her and never saw her again.  Kai used to be married to his best friend.

The Triple H ranch has been let go for the past 9 years.  Now they are working to get it back in shape.  They want to hire a bunch of vets to work their.

No one knows that Kai and Gil knew each other before. Kai was hurt by Gil.

I liked seeing them working together to bring back the ranch.  The characters work together really well.

The setting is a ranch by Jackson Hole,  Wyoming.

I was given this ebook to read by NetGalley and Harlequin for free.  In return I agreed to give a honest review.
Posted by rhonda1111 at 9:25 AM