The Hidden by Heather Graham( Krewe of Hunters (Book 17) 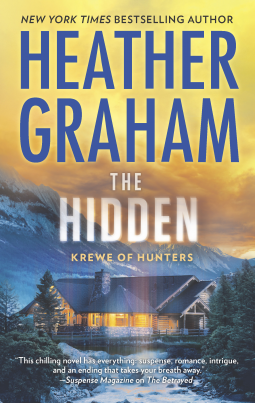 Estes Park, Colorado, is a place of serenity. But it wasn't always so serene. Shortly after the Civil War, Nathan Kendall and his wife were murdered there, leaving behind a young son. The crime was never solved.

Now…historian Scarlet Barlow is working at a small museum attached to a B and B, the same building where that murder occurred. She recently came to Colorado, reeling after her divorce from FBI agent Diego McCullough. Diego—who's just been asked to join the Krewe of Hunters, a unit dealing with "unusual" situations…

When Scarlet unwittingly takes pictures of people who've been murdered—just like the Kendalls a hundred and fifty years before—the police look at her with suspicion. Then the museum's statues of historic people, including Nathan Kendall, begin to talk to her, and she knows it's time to call her ex-husband. Diego heads to Estes Park, determined to solve the bizarre case that threatens Scarlet's life—and to reunite with the woman he never stopped loving.
My review:  The Hidden by Heather Graham( Krewe of Hunters (Book 17)

Lots of ghosts, murder, suspense and love scenes.  Some swearing in a well told story.   Lots of new characters, suspects and some old familiar characters in this 17th book of Krewe of Hunters.

A hundred and fifty years ago Nathan Kendall and his wife were killed on there ranch in Estes Park, Colorado.  Now a series of murders happen again the same way.  Neither murder has been caught yet.

Scarlet Barlow is a divorced historian working at a small museum attached to a B and B same place that the murders happen.  She is a suspect and taken in and questioned because of some pictures that showed up on her camera of dead bodies that disappears.

Scarlet is scared and calls her ex-husband for help.  Diego McCullough a FBI Agent was asked to be a Krewe member and after Scarlet's phone call he accepts.  And the team in FL fly out to see if they can help.

Scarlet is also being stalked but no one sees the guy who is following her.  Other weird things are happening around her.

I really like the scene where the FBI Agents hold a seance with some of the suspects. It was funny, and action packed scene.

I was given The Hidden by Net Galley and Harlequin to read and in return I agreed to give The Hidden a honest review.
Posted by rhonda1111 at 6:51 PM