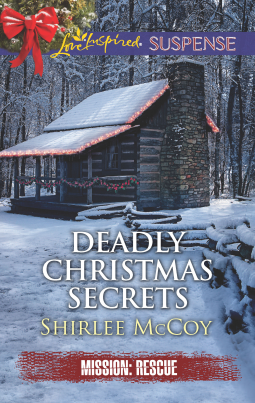 When new evidence surfaces that Harper Shelby's niece is possibly alive, Harper doesn't expect it to endanger her life. For her protection, she has to put her much-guarded trust in Logan Fitzgerald, the man who unknowingly led a killer to her doorstep. Hired to track Harper down, security and rescue expert Logan doesn't like that he's been used to find a woman who someone apparently wants dead. Now he won't leave Harper's side until he can guarantee her safety and untangle the truth from the lies regarding her sister's and niece's murders. The closer they get to finding answers, the more intent the killer becomes on making sure that there won't be a family reunion—or happily-ever-after—for Harper this Christmas.

Mission: Rescue—No job is too dangerous for these fearless heroes

Good plot, action, drama, suspense, mystery, romance and a clean read.  Characters you feel for. secondary characters that you want to know there story too.

Harper Shelby for the last four years as lived alone in a cabin with land making pottery.  After the death of her sister Lydia & niece Amelia she closed off to people.

Logan Fitgerald works for Heart a Freelance security and  hostage rescue team.  He has been hired to find Harper for her brother-in-law Gabe.

What he did do was lead killers right to Harper's home.  Now Logan is determined to protect Harper and calls in more help.

Harper wants answers too about Amelia.  She does not want to stay in a safe house.

Something is always happening in the story.  The characters take time to heal and workout problems and build real relationships.  Not jumping into bed.  I appreciate that life troubles don't get fixed fast. The book is made believable.  Made me want to hug my girls.

I look forward to reading more books from Shirlee McCoy in the future.  I want to see Stella and  Chance's story.

I was given this ebook to read for free from Net Galley and Harlequin.  In return I agreed to give a honest review of Deadly Christmas Secrets.
Posted by rhonda1111 at 9:15 PM