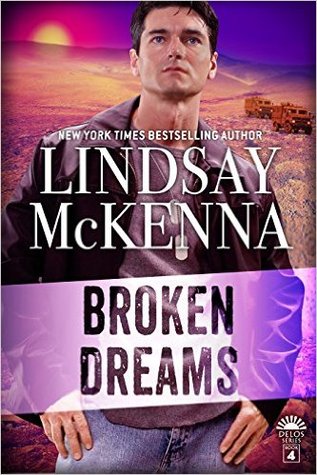 Captain Alexa Culver takes one look at shy, quiet Marine sniper Gage Hunter and feels an instant connection. But Gage has demons in his past that keep him from giving it to their mutual attraction. Alexa believes Gage is worth fighting for, and begins to slowly chip away at his defenses.

Gage Hunter has lost everyone he has ever loved. Lonely and broken, the last thing he expects is to meet someone like Alexa Culver. the redheaded batty is confident and outgoing and makes Gage feel emotions he thought long buried. But before he risks revealing his heart to her she is kidnapped by the Taliban while on a humanitarian mission. Can Gage reach her before he loses his chance for love forever?

I liked this best of all the Delos series, but it dealt with real problems around the world.  It deals with the real problem of the sex trade.  Of people being kidnapped around the world.  Some is tough to read. It feels real to me.  Broken Dreams touched me and I admit to shedding a few tears.  I also wanted to cheer at one seen in the cave.

Broken Dreams is full of drama, family, some romance, a couple of love scenes at the end. Real tough talk about rape and sex trade.  I wanted some other guys stopped and hope in future books they can do that.

U.S. Air Force Captain Alexa Curver is a stationed in Afghanistan. . She's an A-10 combat jet pilot. Alexa is smart and beautiful.  She is a hugger.  She has three months left in Military.

She meets her twin brother Matt for Pizza one night and meets Gage Hunter.  Gage is a Marine Corps sniper. Gage has known Matt for years and Their older sister Talia too.  Gage is enlisted. Alexa keeps asking him to help her.  She is willing to risk getting in trouble for him.

Gage and Alexa only had three days together to get to know each other before things go wrong.  They both felt things but were not spoken to each other.

Alexa is going to work full time for her family's new security company Artemis.  Artemis is going to protect Delos 180 charities around the world when they need it.

While going to a friendly Afghan village to deliver winter clothes and shoes for Delos with other organizations to give help things go really wrong.

I have enjoyed reading the first 4 books of the new Delos series by Lindsay McKenna.  I like that they are coming out right after each other with only a month between them to start the series.

I was given this ebook to read for free by the author.  In return I agreed to give a honest review of Broken Dreams.