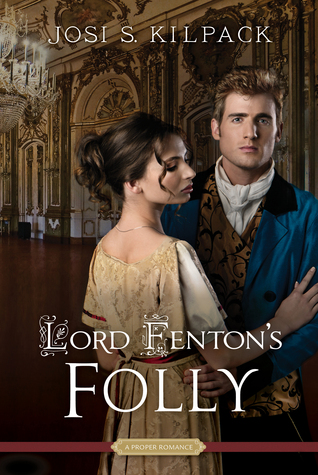 Lord Fenton is a gambler, a dandy, and a flirt-and he must marry or else he will be disinherited, stripped of his wealth and his position. He chooses Alice Stanbridge for two simple reasons: he once knew her as a young girl, and she is the least objectionable option available to him. However, Alice has harbored feelings for Fenton since their first meeting ten years ago, and she believes his proposal is real. When she discovers it is not, she is embarrassed and hurt. However, a match with the most-eligible bachelor in London would secure not only her future but that of her family as well. Determined to protect herself from making a fool of herself a second time, Alice matches Lord Fenton wit for wit and insult for insult as they move toward a marriage of convenience that is anything but a happy union. Only when faced with family secrets that have shaped Fenton’s life does he let down his guard enough to find room in his heart for Alice.

This is a regency romance novel. I loved the characters. especially Alice.  Lord Fenton took sometime to like him. The plot was interesting and kept me wanting to see what would be next.
It is a clean read.  Lots of drama.
Alice is a young girl when we meet her.  She wants a garden for herself at age 7.  Lord Fenton helped her to get it.

Then years later we see Lord Fenton a dandy in ton.  He drinks, gambles and his father threatens to make his cousin his heir to the Earl and properties.  If he does not stop his bad habits and marries.  He needs to prove himself.

Alice has still found her puppy love for him still.  So she accepts his marriage proposal.  Then finds out it will be in name only. She is hurt.

The first half of the book is interesting look at the ton. But I love the part when they start bickering and the rest of the book.  The more you see why the characters act the way they do and understand each other better.  Has some twists that I did not see coming.

I like Josie S. Kilpack stories and would read more of her books.

I was given this ebook to read for free and in return I agreed to give a honest review and be part of it's blog tour.