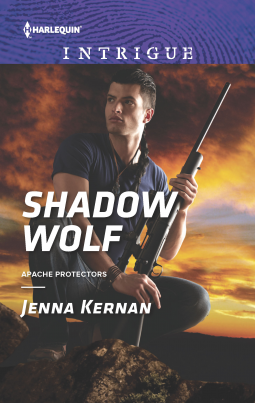 He wanted justice. For his family. For her.

Elite tracker Kino Cosen is hunting for the drug lord who murdered his father. After a decade of searching, he's finally got the Viper in his sight—until a woman gets in the way. Now Kino has a new lead. Aid worker Lea Atlaha has seen the Viper face-to-face…and lived.

But now Lea's a target. And while Kino thinks he's protecting her because she can help him get justice for his father, he soon realizes that she's not just another witness. As the Viper moves in for the kill, Kino has to choose between his need for vengeance, the traditions of his tribe and the woman he has grown to love.

I liked the characters. Kino Cosen and Lea Atlaha.  They were so opposite in there lives.  Kino is a warrior he is tracking smugglers.  His job back home is a cop on the reservation. Lea is a pacifist.  She feels water barrels for the people who are tempted to cross the desert in summer.  She is not afraid to break laws for the greater good. Kino wants to kill the drug lord known as Viper who killed his father.

Lea is the first witness to live who knows what Viper looks like.  That is because Kino saved her.  Now Viper wants her dead. Kino wants to keep her safe so he can find him.

I can see how the debate over water in desert for illegals.  I would rather see water for the innocent.  How scary to cross it.  How the drug lords don't care for the people they get to carry there drugs for them.

There is lots of drama, action, a sex scene and a mystery for the Cosen family that I want to see how that works out.

I was given this ebook to read by Netgalley and Harlequin.  In return I agreed to give a honest review of Shadow Wolf.
Posted by rhonda1111 at 5:42 PM