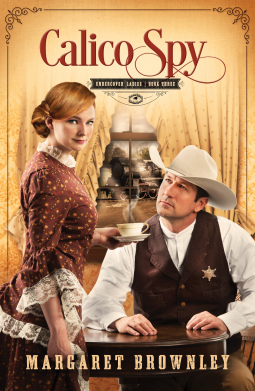 Pinkerton operative Katie Madison's newest case takes her to Calico, Kansas, where two Harvey House restaurant waitresses were murdered in mysterious circumstances. Calico's sheriff, Branch Whitman, has never met a Pink he liked and is stunned to learn the pretty redhead's true identity as she works undercover as a Harvey girl. A tornado hits town, and a past deception puts Branch's eight-year-old-son in danger. Now the Sheriff has no choice but to work with Katie—or chance losing everything he holds dear.

I have liked this series of Undercover Ladies.  Calico Spy fits in good with the other books about ladies Pinkerton agents. It is full of characters that I like and laughed with and cheered them on.  It is a Christian romance historical story.  lots of drama. Just a good overall story.

The setting is Calico, Kansas 1880. Katie Madison is sent in undercover as a Harvey girl.
There have been two Harvey girls murdered there. No suspects.

Kate has always been a tomboy and has problems learning how to waitress the right way.  She also has to figure out how to sneak in and out after the girls have lights out and locked in.

Branch Whitman is the local sheriff.  He does not like Pinkerton agents.  He also has no idea who killed the women and why they did it.  He has a eight year old son that he loves  He has been a widow since his son was born.

I like that there was a whole cast of characters that Kate interacted with.  Some she liked, and some she spilled stuff all over them.  Kate is smart daring, caring and struggles with her past trials in life.

I would read more books from Margaret Brownley in the future.

I was given this ebook to read by Netgalley and Shiloh Run Press and in return I agreed to give a honest review of Calico Spy.