A Tale of Light and Shadow by Jacob Gowans 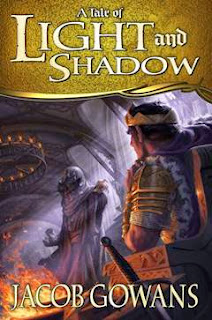 Book Description:
Enter Atolas, a world where swords and daggers both extend life and end it; where magic is feared by all but a few; where feuds and friendships influence kingdoms and courtships. Henry and Isabelle have secretly sworn to marry despite his lowly station. Though Henry is but a carpenter, his devotion drives him to commit an unthinkable act that may cost both of them their lives. Unknown to either, a dark prophecy has set in motion events which will affect not only them, but the thrones of rulers throughout all of Atolas by eclipsing the world in shadow. But all is not lost while hope remains in the guise of an unlikely hero and the strength of friendship.
Series: A Tale of Light and Shadow


About the Author:
Jacob Gowans was raised in Papillion, Nebraska, graduated with a bachelor’s degree in theater studies, and then moved to Cleveland, Ohio, where he graduated from dental school at Case Western Reserve University. Jacob and his wife and three children live in Arizona where he works as a dentist for the Indian Health Services. A Tale of Light and Shadow is his first published book

My review: A Tale of Light and Shadow and Jacob Gowans

I enjoyed reading A Tale of Light and Shadow. I was expecting more of the fantasy angle to the story. It hints at it. The dark prophecy I might have missed it if it was mentioned besides the back cover. Their is more to the story than this first book. It is easy to follow and want more of these characters in the future.

The characters are easy to like. Henry, Isabelle, Ruther, Maggie and James all went to school together. Henry, and Maggie's mother taught them. Henry and Isabelle fell in love. Isabelle was from a noble family that had little wealth left. Her father thought the Vestins were not in his class. He forbid them to see each other let alone marry.

Henry Vestin is a carpenter. A very good one. His sister is Maggie. His best friend is Ruther.

Maggie Vestin is a good friend to Isabelle. She and Ruther are always fighting. She does some interesting things that I want to know more about her.

Ruther is a trouble maker, a drunk, a story teller. A good friend.

James is Maggie's brother. He has been away with the King's guard. Hints at something in his past.


Isabelle's father is the first bad guy in the story. He does not think much of his daughter. He wants wealth but a more powerful family. Their is more bad guys that you want to see defeated.

They are all on a run to escape with their lives most of the book. The journey that they are not very prepared for. I was disappointed when the book ended. I wanted more of it. I hope the next book comes soon.

The setting is Atolas with Kings, Emperors. It has armies with swords, transportation is horses or carriages.

I got lost in the story. I liked Jacob Gowan's writing style. This is the first book of his that I have read but I already picked up another book. I did read his novella The Fool and The Dragonox. It is a short story that is before A Tale of Light and Shadow. It was free at Amazon.

I was given a copy of A Tale of Light and Shadow to read so I could give a honest review of it and join it's blog tour.
Posted by rhonda1111 at 12:03 AM

Thanks for the review! I'm glad you enjoyed the book.