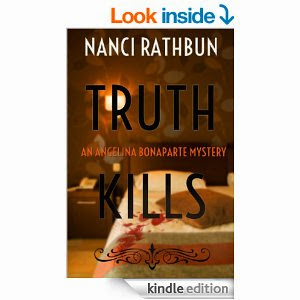 In TRUTH KILLS, librarian-turned-private-investigator Angelina Bonaparte is a woman on a mission--to ferret out cheaters and lowlifes and bring them to justice. Angie has plenty of experience with such men--and not just because her former husband was the king of the lot. As a P.I. in Milwaukee, most of Angie's work is tracking down deadbeats and exposing unfaithful spouses. But, now she's been asked by a betrayed pregnant wife to prove her cheating husband, Anthony Belloni--aka Tony Baloney--innocent of the murder of his kept mistress. Angie's heart tells her to let the skunk rot in prison, but her head convinces her that adultery is not grounds for incarceration. During the investigation, Angie encounters so many people who wished the victim dead that she has to develop a chart to keep track of them all. She also encounters hunky police detective Ted Wukowski, who is still reeling from the death of his former female MPD partner at the hands of a narcotics gang, and thinks women don't belong in the path of danger. As they work toward the same goal--discovering the dead woman's killer--Angie and Detective Wukowski realize their attraction for each other and must decide whether they are strong enough as individuals to work through her lack of trust and his fear of loss.
File Size: 485 KB
Print Length: 252 pages
Page Numbers Source ISBN: 1939816130
Publisher: Cozy Cat Press; 1 edition (July 28, 2013)

Truth Kills is book one of the series. I read first Cash Kills yesterday and liked it so much I went and bought Truth Kills. Because I had read the second book first I knew some of the characters from it. So some of the suspense is hard for me to judge right.

I like Angie. She is smart divorced grandma in her 50's. She keeps in shape through exercise. Her father has mob ties.
She is a PI who is hired by her client first too find out if he is cheating on her. Then when the mistress gets killed to prove her husband is innocent of murder.

Angie wants to show things right away to police but the lawyer who hires her would rather not unless he has too. Detective Ted Wukowski is a serious homicide detective. After Angie sees him workout at the gym she is attracted to him.

Lots of eating out in this series makes me hungry. It is a murder mystery. Lots of drama, some action, humor that draws you into the story and caring for the characters.