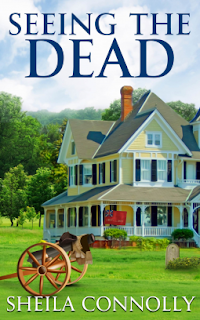 Ever since her first ghostly sighting, Abby Kimball has been trying to unravel the mystery of her newly discovered ability. So when she sees the apparition of a Revolutionary War soldier in the middle of the town green—just days before the annual Patriot’s Day celebration, no less—she’s determined to figure out her connection to the man.

The ethereal soldier is not the only mystery in Abby’s life. She’s also trying to sort out her connection to Ned Newhall, the man who shares her ability and is playing a more serious romantic role in her life every day. But with plans for the celebration ramping up and her job becoming more chaotic by the minute, Abby’s finding it hard to catch her breath, much less come to grips with all the new turns her life has taken.

And when another eerie episode is followed by the appearance of a very curious young girl who seems wise beyond her years, Abby discovers she and Ned may have only scratched the surface of their special ability, and that Ned may hold the biggest surprise yet.
File Size: 618 KB
Print Length: 229 pages
Publisher: Beyond the Page (September 21, 2014)
Sold by: Amazon Digital Services, Inc.
Language: English
ASIN: B00NSWX5Z4

Wow! All of a sudden seeing ghosts would be hard to handle, especially if you could not tell them apart. That is what Abby is dealing with the last six months, plus living in a new place, new job and even a new guy.

Lots of drama, new discoveries, history and love made it hard to put the book down. I learned a lot more of the history that I should have known in a interesting way. I had never heard of Patriot's Day before.

Abby Kimball has had to deal with a lot of changes in her life the past year. She is trying to figure out who the dead people she sees were. She is dating Ned. House sitting and works for a museum.

Ned Newhall has lots of secrets about him. He used to see a lot of the dead but till Abby he had thought it he grew out of it. Ned has never told anyone about the people he saw.
I was drawn into the drama right off from the beginning and want more of Abby and Ned.

The setting for this book is Concord, MASS.

This is a clean read.

I want to read more of Sheila Connolly's work. This is the first of her books I have read I think but not the last one.

I was given this ebook to read from Net Galley and Beyond the Page Publishing. In return I agreed to give honest review of Seeing the Dead.
Posted by rhonda1111 at 8:49 AM