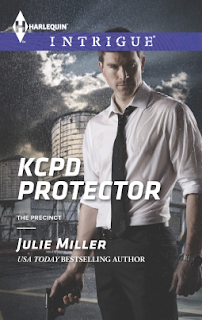 There was no way Deputy Commissioner George Madigan was going to let his beautiful assistant fall prey to a stalker. Because Elise Brown wasn't just another employee. Her vulnerable blue eyes triggered all of George's protective instincts…and now her life was in jeopardy.

Working together almost 24/7 to bring the perp to justice—and sharing kisses passionate enough to ignite a Kansas City heat wave—George and Elise had forged the kind of partnership that could keep her out of harm's way and potentially lead to happily ever after.

My review:KCPD Protector by Julie Miller (The Precinct)

The suspense was good had me guessing right till the reveal. There have been a lot of books in the Precinct different series. I have only read a few so most of the names were not familiar to me. Those who have been reading them you might see a lot of old friends back.
The main characters for the romance are fourteen years apart. I was fine with it until I was adding or subtracting my age and feel its a bit of difference.

Elise Brown was a good assistant. She has bad luck in the romance department so no way she wants to be attracted to her boss. She has a dog and fixing up a house after work and that's enough for her.

Deputy Commissioner George Madigan is divorced. He is busy with work dealing with budget and policing the city. He knows that he can't date a co-worker. His nephew is Nick a detective from Tactical Advantage.

Elise Brown gets flowers one day at work and realizes it is like what a old boyfriend who was killed years ago sent her 23 yellow roses. No card. She is a little shaken up at work. She gives flowers away and next day the same flowers are back on her desk with no finger prints on vase at all. Elise has a stalker.

George is worried about her and even goes as far as to watch outside her house from his car. Calling in favors till they can make a case.

There is plenty of drama, action, suspense and love scenes and throw in a Tornado in makes for a exciting book.

I would like to read more suspense books from Julie Miller in the future.

I was given this ebook to read and asked to give honest reviews of it in exchange. My own opinion of KCPD Protector.