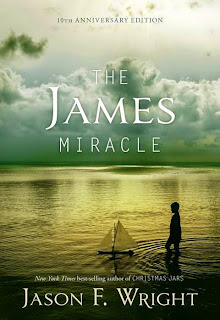 now enjoy his first novel, never before released to the national

Sam and Holly Foster never expected the hardship that caused

their perfect world to shatter. It will take the miracle of their

them that heaven is not far and that love is never lost.

Jason F. Wright is the New York Times bestselling author of Christmas Jars and The Wednesday Letters. He writes a weekly column for the Deseret News and Northern Virginia Daily. His

articles have appeared in over fifty newspapers and magazines across the United States including The Washington Times, The Chicago Tribune, and Forbes. A popular speaker, Jason has been seen on CNN, FoxNews, C-SPAN, and on local television affiliates around the country. Jason and his wife, Kodi, live in Virginia with their four children.


My review: The James Miracle by Jason F. Wright

This is a fast read, but could have read it a lot faster if I could see through the tears. This is touching story, sometimes funny, sometimes sad. It makes you want to reach out and hug your family. Sometimes we get so busy and forget to slow down spend more time with your family.

Sam and Holly Foster seemed so real to me I had a hard time thinking it was fiction. I liked them. It starts out before they met and how they met. Then James they brought James into their family. Sam & Holly both worked full time and led super busy lives.

The setting for this book was VA, Washington D.C. area

I was impressed that this was first book. It was written as a Christmas present.

I don't think I will at sail boats the same way again. Miracles and prayers do come answered, just sometimes it is not the answer we want, but what is needed.
I like Jason F. Wright writing style. He writes characters that we want to see more of. Story is short to the point but filled with wonder and emotional up and downs. I will keep reading his works with a box of tissue handy.

I was given this book to read from Shadow Mountain so I could give an honest review and be part of its blog tour.