His Most Suitable Bride by Renee Ryan (Charity House) 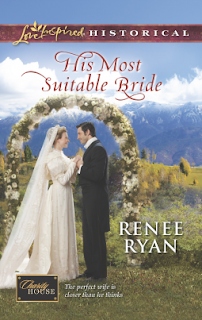 No one in Denver knows how close Callie Mitchell once came to ruin. Dowdy dresses and severe hairstyles hide evidence of the pretty, trusting girl she used to be. Now her matchmaking employer wants Callie to help find a wife for the one man who sees through her careful facade.

For his business's sake, Reese Bennett Jr. plans on making a sensible marriage. Preferably one without the unpredictable emotions that spring to life around Callie. Yet no matter how many candidates she presents to Reese, none compare with the vibrant, intelligent woman who is right under his nose—and quickly invading his heart.

My review: His Most Suitable Bride by Renee Ryan

I liked His Most Suitable Bride. Characters were likeable. I kept expecting them to make plans with some of the children of Charity House. I have only read one of this series but I plan on going back and reading more of them.

It was fun to see them draw closer. You could see right off the plans that Callie's boss Mrs. Singletary was making. She did not like the way Callie dressed or did her hair. She wanted to throw her and her lawyer together as much as possible.

Callie Mitchell comes from a big ranching family. She is Mrs. Singletary's new Companion. She has dressed for years to look fade into the background. She has liked Reese Bennett for awhile.

Reese Bennett Jr. is a lawyer taking over from his father. His fiancé had broken off their engagement and left town. She was Callie's younger sister. He knows that Mrs. Singletary likes the idea of matchmaking. She has him in her sights. So he asks her for help finding him a bride. He wants to be a father.

Mrs. Singleton has been a widow for years. She tells Reese that Callie will help him find a bride.

Callie and Reese both spend a lot of time at Charity house. Playing with the children or teaching them to cook ect. Two new kids twins like to be with Callie or Reese.

This is a simple romance, as they get to know each other they draw slowly to each other. They also learn that it is okay to make mistakes in their lives. They need to forgive themselves too. Does have church, prayer and scriptures in it in a natural part of the story.

The setting of this book is Denver, Colorado 1895. Charity House is a orphanage or home for the children of prostitutes.

I am already reading my next book by Renee Ryan now.

I was given this ebook to read by Net Galley and Harlequin. In return I have agreed to give honest review of it.