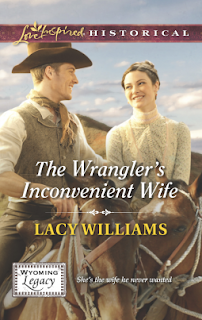 With no family to watch over them, it's up to Fran Morris to take care of her younger sister, even if it means marrying a total stranger. Gruff, strong and silent, her new husband is a cowboy down to the bone. He wed Fran to protect her, not to love her, but her heart has never felt so vulnerable.

Trail boss Edgar White already has all the responsibility he needs at his family's ranch in Bear Creek, Wyoming. He had intended to remain a bachelor forever, but he can't leave Fran and her sister in danger. And as they work on the trail together, Edgar starts to soften toward his unwanted wife. He already gave Fran his name…can he trust her with his heart?
Series: Love Inspired Historical\Wyoming Legacy

The setting is Wyoming late spring 1900

A train carrying orphans is derailed. Fran Morris lied about her age and was found out. The judge couldn't let her just leave with her younger sister.
Edgar White married her instead of letting her go to saloon or his younger brother marry her.

Edgar was a orphan on a train years ago too. His father took him in plus others. Edgar feels he owes his father everything, while he is gone Edgar was in charge getting the cattle to the buyer. With the train derailed he and his brothers decide to trail drive them. Fran and Emma sneak into the wagon.

Fran is only 19 but passes as younger. She is very protective of her sister. She has a lot of faith that her prayers are answered. Her parents have died and her brother has disappeared. She pretended to be younger so they could go on the orphan train.

Emma is fifteen. She has become fragile. A older richer man has become obsessed with her and tried some things with her. His men have even come out west looking for her. She is scared and shy.

You have to admire Fran, she is smart, full of faith and a hard worker. Yes she passed herself off younger that was the only way she had to get her sister away. She even agreed to marry Edgar.

This is a good story. I have only read now two books in this series but would read the rest of it some time. It does mention faith, prayers and scriptures. It fits well into the story. It is full of drama, action and good dialogue.

I was given this ebook to read for purpose of writing an honest review of The Wrangler's Inconvenient Wife. received the book through Net Galley and Harlequin.
Posted by rhonda1111 at 7:30 PM