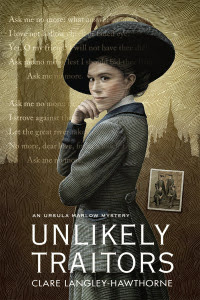 Ursula Marlow thought she was done with death, but when her fiancé, Lord Wrotham, is arrested on charges of treason, her world is turned upside down. It is the winter of 1913, and the British Parliament, unsettled on the question of Home Rule for Ireland, is shaken over allegations of a plot to sell naval military secrets to Kaiser’s Germany and liberate Ireland from English rule. For the first time, Ursula must work together with Chief Inspector Harrison to uncover the truth about Lord Wrotham’s involvement, as well as his mysterious past.

As the investigation continues, Ursula is drawn into the shadowy world of the Irish Republican Brotherhood and a web of espionage and betrayal. She must race against time to clear Lord Wrotham’s name and thwart a plot that threatens not only British national security, but also her life

Clare Langley-Hawthorne was raised in England and Australia. She was an attorney in Melbourne before moving to the United States, where she began her career as a writer. Her first novel, Consequences of Sin, featuring the Oxford graduate, heiress, and militant suffragette Ursula Marlow, was published in 2007. The second book in the series, The Serpent and the Scorpion, was published in 2008. Consequences of Sin was a San Francisco Chronicle Bay Area bestseller and a Macavity Award nominee for best historical mystery. Clare now lives in Denver, Colorado, with her husband, twin boys, and collie, Hamish.

This is a complicated plot. I was not sure who did what till the end. I feel kind of lost that I have not read the first two books in the series. It deals with build up to the first World War, traitors, spies, Irish home rule, murders. Their were some twists and turns I did expect but most I was surprised.

The setting was 1913. From England, Germany, Ireland and other countries.

I am not that familiar with world events around that time, so was more lost.

Ursula Marlow is engaged to Lord Wrotham. She is very rich but has to have someone oversee her money till she is older than 30 or married. She wants women to have more freedom and the right to vote. She is bright.
Lord Wrotham is her fiancé.

Lord Wrotham is a lawyer. He inherited family land after brother's death and debt to go with it. He is arrested for treason of British government. He makes Ursula break there engagement and announce it in the papers. He won't defend himself to anyone. He does not want Ursula to visit him in prison.

I was never sure where police stood, especially Chief Inspector Harrison. He thought Ursula was innocent and then accused her. They leaked stuff to her.

It had a good suspense, lots of suspects. Lots of drama, some action, history and a clean read.

Parts of it were slow build up.

I was given this ebook to read so I could give honest review of Unlikely Traitors and be part of its blog tour.

September 22– Cozy Up With Kathy – Interview

Thanks for this review. I just went to my library website and put the first in the series on my list.

Great! Thanks for the review - I'm so impressed that this reviewer reads at least one book a day!