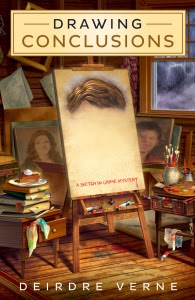 Cece dumpster dives her way through this suspense-filled murder mystery…
Cece Prentice is a most unusual young woman. Heiress to a large fortune thanks to her doctor father, who is the head of a genome company on Long Island, Cece is also a freegan—ecologically-minded and socially conscious. If that happens to include dumpster diving for half an old hamburger, previously started by someone she has never met, then so be it.
Cece would still be going about her ordinary, albeit weird, life had her beloved twin brother Teddy not been murdered. Drawn into the police investigation, CeCe uses her sketching abilities and knowledge of her father’s company to provide Detective DeRosa with the clues he needs to ferret out what happened to Teddy. But she soon realizes that this mystery is much more complicated than she ever imagined. 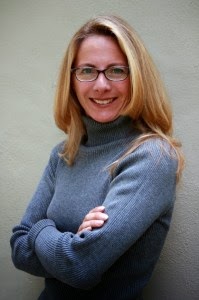 
My review: Drawing Conclusions by Deidre Verne (A Sketch in Crime Mystery)
4 STARS
This is a good mystery with twists you don't expect and others that I did see coming.  There is a lot of science and DNA and some different life style of  Freegans.  Where I can appreciate some of that life style others I would not want like eating out of garbage.
The characters have a good mix to them.  The main character is Cece Prentice.  Cece owns a big house and land. She was disowned by her father.  While still close to her twin brother.  Cece dumpster dives for food.  I like her. Cece is an artist
Cece's twin brother Teddy is found dead at work. Her life is in danger. She ends up working with Detective DeRosa to figure out what happened to Teddy and who wants her dead.
I wanted more to the story. Some of the ending I did not like but it worked.  Other choices I did not like but for the most part I liked the story and want to see what happens next to Cece in the future.
The setting is New York state.
I was given this ebook to read by Net Galley and Midnight Ink.  In return I agreed to give a honest review of it and be part of Drawing Conclusions blog tour.

To enter leave a comment with name and email to enter.  Without email I can't let winner know.  Winner will have 2 days to respond to email or other winner will be chosen.

Thanks for this great feature and interesting interview and giveaway. saubleb(at)gmail(dot)com

Ohhhh, this really looks great. I would love to read it !

I hope you enjoy the book. I'm working on the third manuscript in the series now.

LOVE this cover!!
thank you for the giveaway!!

It's really nice to have a bit of background about the author. I hadn't heard the term freegan before~
interesting~always learning! This book sounds like a wonderful read and I love the cover and title! Thank you so much for a terrific review and the chance to win a copy!

Sounds fascinating, although dumpster diving makes me squeemish. Half eaten food - NO, grocery store castoffs - I can see that.

Drawing Conclusions sounds intriguing, and I have added it to my TBR list. Thank you for the giveaway.