The Engagement Bargain by Sherri Shackelford 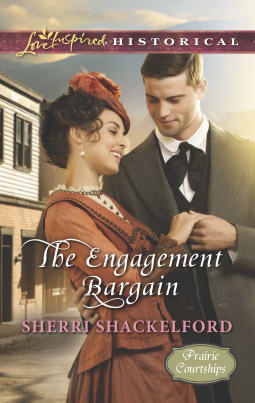 Rock-solid and reliable, confirmed bachelor Caleb McCoy thought nothing could rattle him—until he discovers he needs to pose as Anna Bishop's intended groom. After saving her life, his honorable code bid Caleb watch over the innocent beauty. And a pretend engagement is the only way to protect her from further harm.

Raised by a single mother and suffragist, Anna doesn't think much of marriage—and she certainly doesn't plan to try it herself. But playing Caleb's blushing bride-to-be makes her rethink her independent ways, because their make-believe romance is becoming far too real…

Prairie Courtships: Romance on the range

My review: The Engagement Bargain by Sherri Shackelford

This is a romance that is set to the background of Women fighting for the vote.  It is an interesting time that I take for granted how long the fight was for.  The main character Anna Bishop is shot while speaking to a small group out west in Kansa city.

Anna Bishop was raised by a single mother.  The more I hear about the mother the more I dislike her.
Anna was raised by servants. Her mother said they did not need a man in their lives.

Caleb McCoy went to hear Anna at the suffragist ralley with his sister JoBeth. Caleb is a vet. He comes from a big family. When gunfire happened and Anna was wounded Caleb went to help.  The doctor did not come so Caleb treated Anna.

Caleb & Anna pretended they were engaged to protect Anna till her shooter was found.

The setting was in 1884 in Kansas City, Kansas and in Cimarron Springs

I liked the characters.  I have read a couple of books with the McCoy's in them and want to read more.

Lots of drama, mystery, humor and romance. Also a clean read.  Besides dealing with  right to vote also dealt with forgiveness.

I was given this ebook to read from Harlequin and Net Galley and in return I agreed to give honest review.
Posted by rhonda1111 at 3:50 PM